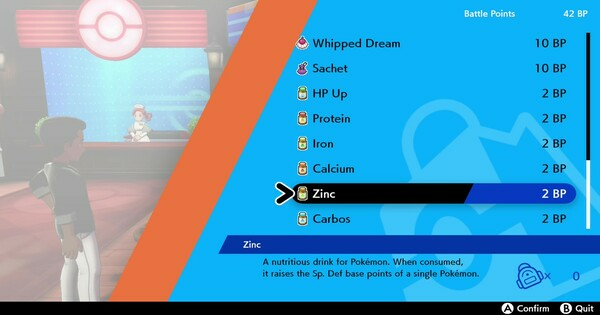 Read this article to find out about the BP farming in Pokemon Sword and Shield. Read about what BP (Battle Points) is, how to get BP in Battle Tower, how to spend it, & more!!!

What Is BP (Battle Points)?

BP (Battle Points) are points awarded for winning Ranked Battles at the Battle Tower. They can be used to purchase many end-game content like Bottle Caps and Mints.

Battle Tower is located in the Northernmost in the mini map. If you have visited there once, you can do fast travel to it.

You will need to beat the game by becoming the Pokemon Champion in order to unlock the Battle Tower. From there, you will be able to do Rank Battles to get and earn some BP.

Check Out All Story Walkthrough

How To Farm BP - Farming Guide

The above 2 methods are the most efficient ways to farm BP!

First, try raising the rank of single and double battle & collect rewards for moving up through the ranks. Use rental teams or breed for stronger Pokemon when you get stuck.

Learn How To Breed For Stronger Pokemon

Single, Double Battles are separately ranked and thus have separate rewards. Rank up both of them to earn BP at twice the speed.

Move Up Tiers For Greater Reward

Rank Battles are divided into Tiers. As you move up the ranks, your tier increases, and the rewards for each subsequent rank increases. Push up the ranks for even more BP!

Use Eternatus For Best Efficiency

Use Eternatus for the early phase of Battle Tower. Its extremely high Sp. Atk and Speed overwhelms most of the opponents.

See Eternatus's Base Stats From Here

How To Spend BP

Acquired BP can be spent at the BP Shop at the Battle Tower. Look for the man and woman in the middle of the left counter. The man sells items while the woman sells Mints.

Natures are a Pokemon's unique personality, which affects how their stats develop. This can be changed by using Mints, letting players choose which stats to emphasize.

How Important Are Pokemon Natures?

A BP Shop is located at the Pokemon Center in Hammerlocke which carries multiple enhancement items and vital Pokemon evolution items. Buy with BP if you just can not seem to find them.

Best Items To Buy With BP

As BP Can sometimes be slow to come by, we recommend getting items that are vital for End-game & competitive play or are BP shop exclusive first.

Check out All BP Shop Items and What You Should Buy First!

The map is not a minimap. A minimap is a little map in the corner. That is just a regular map.