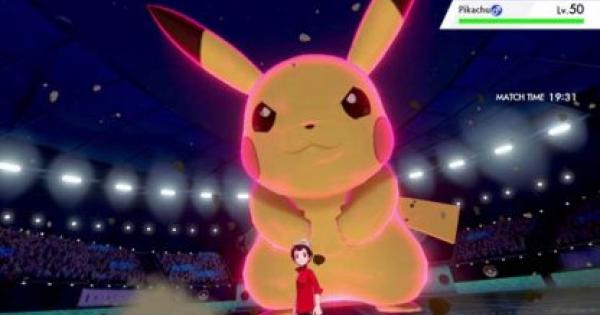 Read this article to find out the meaning of abbreviations & terminology often used in Pokemon Sword and Shield. Learn about IVs, EVs, pseudo legendaries and more!

A similar phenomenon to Dynamax, but your Pokemon will also change their appearance. Gigantamax Pokemon are considered rare.

A new feature where you can send your Pokemon out on missions to gain exp and even Base Points!

Find Out The Other Advantages Of Poke Jobs Here!

A new massive zone in the Galar region where you can go camping, encounter many Pokemon, cook curry, and battle special Dynamax (or even Gigantamax) Pokemon.

Battles against powerful wild Dynamaxed Pokemon. Can be done with up to 4 people.

An activity to do with your Pokemon. You can also join other players' camps and play with their Pokemon.

See What Else You Can Do In Camps Here!

A food that can be cooked at camps. There are many recipes to cook and collect.

Find Out More About Curry Here!

These are the fundamental, unchanging stats of every individual species of Pokemon. There are 6 stats:

Determines how much health your Pokemon has.

Increases the damage of physical moves.

Reduces the damage you take from physical moves.

Increases the damage of special moves.

Reduces the damage you take from special moves.

Learn About Base Stats In Detail!

These are values assigned to each stat (from 0-31) which are unique to every Pokemon, even those of the same species.

Get More Information On IVs Here

These points increase a particular stat. They are obtained when you defeat Pokemon. One Pokemon can earn a maximum of 510 Base Points.

Find Out How To Maximize Your Pokemon's Stats With EVs Here

These are Pokemon which are unique and extremely powerful. There is typically only one of them in the game. They cannot breed.

Find Out Everything About The New Legendary Pokemon!

These are Pokemon which are extremely strong, but are not unique. Typically they have a Base Stat total of 600.

Check out Base Stat Ranking In Galar Guide Here!

The process of pairing up two Pokemon to create a new one. This is used to create the strongest possible Pokemon.

Natures are passive effects that change the stat growth of a Pokemon. Natures usually boost one stat and lower another.

Check Out All The Natures Here

Abilities provide a passive effect to every Pokemon. A Pokemon can only have one ability.

Learn About Abilities And Hidden Abilities In Detail Here!

A virus which can sometimes infect Pokemon. It causes your Pokemon to earn much more Base Points from defeating Pokemon. It has no negative effects.

Check Out How To Get Pokerus!

STAB stands for "Same Type Attack Bonus" and it refers to the 1.5x damage bonus a Pokemon gets when it uses a move which is the same type as itself.

These are moves which directly hit the opponent. They are usually physical moves. They will then trigger certain abilities or moves.

This is a temporary condition that affects how your Pokemon performs in battle. These include Burn, Paralysis, Frozen, Sleep, Poison, etc.

A type matchup refers to the effectiveness of one Pokemon against another Pokemon.

Check Out All The Type Matchups Here!

The weather during a Pokemon battle can be changed and provides different effects on different Pokemon. Weather effects include Rain, Sunny Day, Hail, and Sandstorms.

Most main Pokemon games feature 3 Pokemon you can choose at the beginning of the game. These are known as starters, and their types have always been Grass, Fire, and Water respectively.

Find Out About The New Starters in Sword And Shield Here!

The Pokemon Eevee has 8 possible evolutions: Vaporeon, Jolteon, Flareon, Umbreon, Espeon, Glaceon, Leafeon, and Sylveon. All of these are referred to as the "Eeveelutions".

Previous games in the Pokemon series are generally referred to as Generations, or "gen" for short.