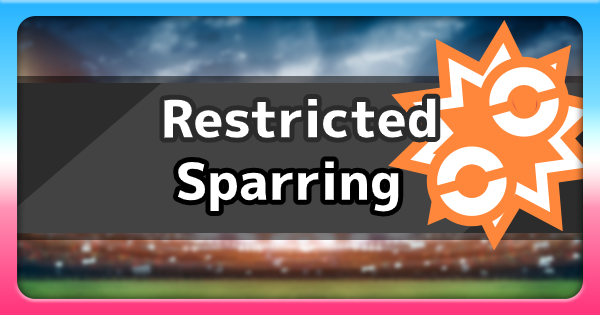 Restricted Sparring Battle - What Is It?

A New Gameplay Mode In Isle of Armor

Restricted Sparring mode will only be available for players who have cleared the Isle Of Armor story. You will need to purchase the DLC to unlock this feature.

Restricts The Pokemon You Can Use

↑ A team of Ground types about to enter Restricted Sparring.

The main draw of this mode is that it will limit the type of Pokemon you can bring to a battle. This means you will need to start thinking more about the type of Pokemon than you have before. This is a good opportunity to raise up strong Pokemon in all varieties of types.

>> Check Out All Pokemon By Type In The Pokedex Here!

Fight With A Party Of A Single Type

After you beat the game, you can challenge the Restricted Sparring. In this battle mode, your Pokemon's type will be restricted. Your opponent's Pokemon type is sometimes strong against yours, although it is possible that your opponent's Pokemon are random. It's important to learn moves that can cover all your weaknesses.

Although you can continue past 5 battles, you will not get more heals if you continue! Consumable items such as the Weakness Policy and Berries will respawn only if you use a restore!

EV Training Is Most Important!

If you don't have perfectly raised Pokemon for each type, that's OK. Although it's ideal to have a perfect Pokemon with max IVs, EVs, and Nature, in reality, as long as your Pokemon has average IVs, EVs will make the biggest difference in terms of performance. You'll be getting lots of BP from this event anyway, so save it up to buy Nature-changing Mints as well!

The Faster, The Better

Having a high speed, high attack Pokemon that can take out opponents in one shot is ideal for this mode. Since you have a limited amount of heals available, you'll need to minimize the amount of damage you take.

Consumable items, such as the Weakness Policy and Berries will only respawn on your Pokemon after using a restore! This means you won't be able to have them at your disposal every fight. This is less than ideal, so try to use another item instead. Leftovers and Choice items are a safe bet. Avoid items that reduce your health, such as the Life Orb.

Use Your Dynamax Wisely

Every battle, you'll have the opportunity to Dynamax your Pokemon. This presents a huge advantage over your AI opponent, so make sure to use it wisely. Remember that Dynamaxing unlocks your Choice item restrictions!

Reward Of Restricted Sparring Is BP

Just like Battle Tower rewards, you can get BP (Battle Points) by winning at Restricted Sparring. The more you win, the more BP you get.

Amount Of BP You Can Get

※ 30BP will be given as a one-time prize when you clear the 5th battle for the first time!!!

※ Team recommendations for the other types are coming soon!!!

The poison challenge can be a bit difficult if you don't have enough Pokemon trained already. If you do competitive ranked battles you probably already have a Toxapex, but it alone will likely not be enough. You will need the raw damage of Venusaur and Gengar to push you through.

As you'll only have 2 heals available for this mode, having a sustain move like Giga Drain will be a huge help. It will also offset your Life Orb recoil damage.

If you're missing the 3 we recommended, here are some alternative Pokemon you can use!

The team we've set up above is unfortunately slightly weak to fire. Volcarona takes neutral damage from fire, & can use a Psychic move, so that might be enough for some cases, but if you get really unlucky, consider swapping Durant to Golisopod.

If you can get a fully trained up Durant with 252 Speed/Atk EVs and a speed-boosting nature with the ability Hustle, you can likely one shot a majority of Pokemon you come across. Remember that Dynamaxing unlocks your Choice Band and that Dynamax moves always hit!

As mentioned above, Golisopod is a good bet if you're really struggling with Fire types for this challenge.

Snorlax is an obvious choice as your lead here, as it has great stats and moves at its disposal, but don't discount Diggersby here, a Choice Banded Quick Attack can often be enough to finish off a low-health enemy.

Snorlax is a Pokemon with a wide variety of builds, many of which are quite viable. Check out our detailed Snorlax guide here to decide which ones you want to run. You could even use the Gigantamax build, if you want.

Diggersby's decent 112 attack, combined with a 150 power STAB Giga Impact can be quite deadly. STAB Quick Attack and Earthquake are also nothing to sneeze at.

The above three are also good alternatives, but make sure they're properly trained with the right moves before using them.

Note that Alakazam is a newly added Pokemon in Isle of Armor, so you'll have to find one on the Isle to catch and train up.

Alakazam and Hatterene's raw damage and decent move coverage should be enough to get you through this challenge. Hatterene and Reuniclus are both very slow, so if you want, you can run Trick Room on Hatterene - but only use it after Alakazam dies.

We recommend building Reuniclus somewhat tanky for this, with HP or Defense EVs. Running Recover on it will also allow you to stall out fights a little bit longer. Be careful vs. Dark type opponents though.

If you don't have trained versions of the 3 we recommended and want some more coverage, Starmie is a good bet. Espeon and Gallade are also decent Pokemon to have as well.

cinderace for fire, inteleon for water, rillaboom for grass maybe?

How about fire, water, grass team?

For all interested, I've made a Playlist for all types here https://bit.ly/2Cb8XDV

The challenge is fun, but reward is rather disappointing.