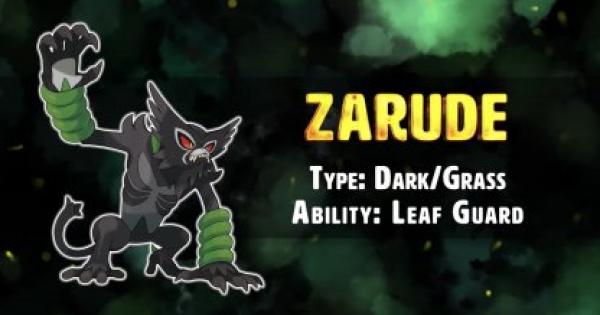 Pokemon Sword Shield
Zarude Release Date & How To Get

Learn about Zarude (New Mythical Pokemon) in Pokemon Sword and Shield! Get info on how to get Zarude, its release date, movie tie-in, how to get it in the US, distribution,.

We’ve confirmed the existence of Zarude, the Rogue Monkey Pokemon.

When fighting, it swings around using trees & their branches, attacking relentlessly with its sharp claws or any other means it has. Its quick wit helps it excel in battles.

Players will be able to get Zarude when they purchase a ticket for the new Pokemon Movie "Coco", coming out this Winter (in Japan). Players will also obtain a shiny Celebi as well! Pre-sales for tickets begin on August 7th. It is expected that the Pokemon will be distributed after you've bought your ticket.

Release information for North America or Europe has not yet been announced, so it is unclear how players in those regions will obtain this Pokemon.

(※) Note that North American/European distribution event may be slightly or entirely different from the Japanese one.

Zarude is a Pokemon that can be found deep within jungles, using the local vegetation for maximum mobility. The vines wrapped around its arms can be used to swiftly get from place to place, and also apparently have healing properties. Perhaps it will be able to use some recovery moves?

*1 random Ability will be assigned.

How to Get Zarude - Location & Evolution

Note that Zarude was not released alongside the Isle of Armor expansion! Although it's possible his data is in the game already, he likely won't be available until August 7th, when tickets for the movie go on sale.

Alongside the Isle of Armor expansion, a whole bunch of new moves were added to the game. Among these is a move called Jungle Healing, which is speculated to be Zarude's signature move. This may have misled players into thinking that Zarude was already available.

Where to Find Zarude

▲ A preview trailer for the new Pokemon movie, featuring Zarude.

This article will be updated as soon as more information on Zarude is revealed!

*Base Stats refers to a certain set status value, unique to each Pokemon species!!

Check Out Base Stat Ranking

An Egg Cycle is a unit of measurement in Pokemon that determines how long it will take for any given egg to hatch. One cycle is equal to about 250 or so steps. Egg Cycles are different for each species of Pokemon.

Tap the Move name to show the TM's location.