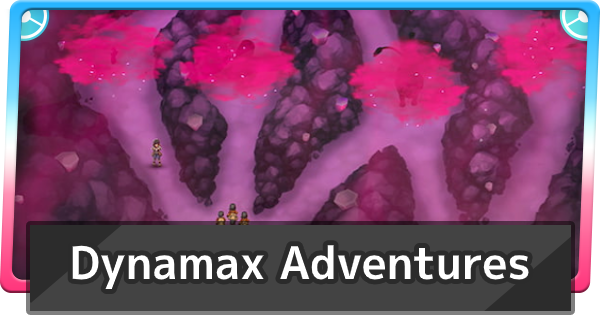 Check out the new Dynamax Adventures introduced in Pokemon Sword and Shield Crown Tundra. Find out what Legendary Pokemon you can catch, mechanics, healing, endless mode, and more!!!

What Are Dynamax Adventures

The new Dynamax Adventures mode is a new feature introduced in the Crown Tundra. In this mode, 4 trainers work together to defeat 4 consecutive battles with Dynamax Pokemon. Reach the end of the den and catch legendary Pokemon!

Check Out A List Of Available Legendary Pokemon Here

If you want to challenge yourself, there will be an extra challenging mode called "Endless Dynamax Adventures Mode". This mode will let you keep going until you lose a battle.

In order to unlock Endless Mode, you'll have to first clear 5 regular Dynamax Adventures. After doing so, you can talk to the man dressed in medical clothing to the left of the scientist.

One major stipulation of this mode is that you cannot keep any Pokemon you catch during it. In exchange for this, you will get more Dynite Ore than usual! We recommend doing this mode only after you've obtained all of the legendary Pokemon available in the game so far.

The main currency rewarded by Dynamax Adventures is known as Dynite Ore. It is awarded to you for meeting certain conditions during an Adventure. In general, you should expect to get 9-11 pieces per run.

Learn How To Farm & Get Dynite Ore Fast Here

Conditions To Get Dynite Ore

※ There may be more available reward conditions. We will update this as we progress with our testing!!!

Get Ability Patch With Dynite Ore

This currency can be used to buy the brand new Ability Patch, which gives your Pokemon its hidden ability! Ore can also be used to buy EV and EXP boosting items.

Get Past Legendary Pokemon

The main draw of Dynamax Adventures is the fact that you'll be able to obtain legendary Pokemon from previous games in the franchise! The deepest part of the cave will contain such legendaries, so you'll have to make it all the way to the end.

Check Out The List Of Legendary Pokemon In Crown Tundra Here

The legendary Pokemon that appear in Dynamax Adventures will have a catch rate of 100%! If you're able to clear all the raid battles and get to the Legendary Pokemon, you're guaranteed to capture it. If you want your Legendary to have a special ball, this means you can do so without worrying about if you can catch it or not!

How To Get All Legendary Pokemon Efficiently

Peonia Tells You Locations Of Pokemon

By talking to Peonia in the left part of the cave, you can gain access to Lairs which contain certain Legendary Pokemon. However, you'll have to pay her 5 Dynite Ore for this. After you've purchased this information, talk to the scientist to access a menu and go to the lair!

Save Legendary Pokemon's Locations To Retry

In standard Pokemon fashion, you won't be able to obtain all the legendaries with just one game. You will need both Sword and Shield to get them all, so make sure to coordinate with friends!

After you fully clear all 3 paths of the Crown Tundra story, you'll get a "Legendary Memo" which will allow you to start fighting against Ultra Beasts in Dynamax Adventures. Once you get this from Peony, talk to the Scientist and they will automatically unlock!

Check Out Crown Tundra Walkthrough To Beat The Game

Catch 5 Ultra Beasts To Get Poipole

Naganadel, which is evolutionary form of Poipole won't appear in the Dynamax Adventure. To get Poipole, you need to catch 5 Ultra Beasts and unlock the event.

Among the Pokemon that appear on the way to the Legendary, you can also catch Alolan form Pokemon in Dynamax Adventures.

In Dynamax Adventures mode, you can't use your own Pokemon. Instead, you have to use rental Pokemon. If you win the max raid battle, you'll have a chance to catch that Pokemon and one trainer on the team can swap the newly caught Pokemon in for the Pokemon they had before.

Use Pokemon You Caught

▲Swap Pokemon as you explore deeper in the den

You can choose to swap out your current Pokemon with one you caught during the adventure! Only one of the players on your team can do this, and priority is determined by the order on the left (top down). If you don't get a Pokemon, there's a chance one of your teammates will.

Your team will have a total of 4 hearts available per Adventure. Every time a Pokemon on your team faints, you will lose one heart. Losing all 4 hearts will kick you out of the raid. There does not appear to be a way to regenerate hearts, so you'll have to be very careful.

Your Pokemon's HP and PP will carry over after the battle, meaning they won't heal after every fight. There are items you can find that will heal you however. Other than that, you'll have to swap with the Pokemon you've caught along the way to keep your HP up.

The only way to restore the HP of your Pokemon (except for in-battle moves, that is) is to walk into Berries on the map! These will restore some of your HP.

Scientists will trade your Pokemon for a random one! We're not sure what determines the type of Pokemon you're given, so you'll have to tread carefully. Only do this if you're unsatisfied with your current pick, or it's nearly fainted!

Backpackers will let you choose from five possible held items for your Pokemon. These seem to be random. Choosing wisely here will be important when it comes to taking out the final Legendary Pokemon.

How To Get Best Pokemon In Dynamax Adventures

You Can't Use Judge Function

You can check the stats of the legendary Pokemon you've caught before adding to your party permanently. However, you can't use Judge function when doing so. Because of this, you need to calculate IV from its actual stats.

How To Catch Best Pokemon

If you didn't keep the legendary Pokemon you've caught, you can retry the same den over and over until you get the best stats.

Get A Penalty If You Reset 3 Times

Dynamax Adventures will save two times: once prior to entering and once when leaving the adventure. Resetting your game at any point in-between will toggle a penalty flag. Resetting three times will cause the scientist to scold you. At this point, you won't be able to do any further adventures until you pay the penalty fee!

The amount of Dynite Ore you have to pay as a penalty will increase depending on how many times you reset. Since the penalty keeps going up, you'll want to refrain from resetting as much as possible!

Penalty Incurred When Solo As Well

This penalty will be incurred by all players who reset, regardless if they're doing it during online or solo play!

How To Clear The Penalty

If you complete a Dynamax Adventure all the way to the very end, your penalty counter is reset! This means that it is possible to reset twice before even incurring any penalty whatsoever.

Does Not Consume Pokeball

Save Rare Pokeball By Resetting

If you are using rare Pokeball to catch the legendary Pokemon with best stats and don't want to waste them, you can reset and get penalty instead.

If you know the Legendary you're up against, obviously pick something that works well against it. If you don't know, try going off Base Stats - although not always the case, generally the higher the base stats, the better the Pokemon.

Don't Be Afraid To Swap Pokemon

Losing even a single heart on the way to a Legendary can be run-ending. As such, you should feel free to swap out Pokemon that are low on health. If your team does not have any healing moves, this is often the best way of effectively healing your Pokemon, although there is an element of randomness to it.

Check The Type & Shadow Of Opponents

You can tell which Pokemon you'll be facing from the type and shadow in the purple fog. Move the map with the right arrow stick to see what Pokemon types are coming up and plan accordingly. The final battle will be the most difficult, so try to prepare for that!

Choose The Path With Berries & NPCs

Paths with Berries can help you recover your HP if you're getting low. We strongly recommend going for a Backpacker, however, as the item they provide you can often times be quite strong and help you in your final battle with the legendary. The backpacker will give 1 item to each Pokemon on your team, which is also nice.

I dont get it, I played it two times with strangers, but can I play it with my friends too? I don't see any option.... Maybe it'll be unlocked as I proceed in the game?

Being that you can do offline play on the dynamax adventure. My problem is which legendary Pokémon will go to what game?. Since only certain Pokémon will be in one game

I think the question on a lot of players’ minds (my own for certain) is whether the Dynamax Adventures can be done in offline solo play. If not, for players who don’t like online or when the servers are no longer supported, it will become the most useless and infuriating part of the game.