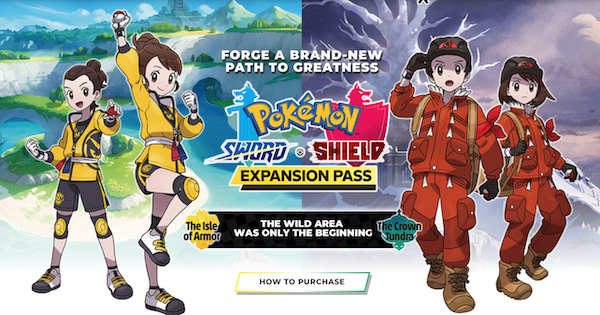 Read this to learn about the Pokemon Sword and Shield Expansion Pass (DLC) for the Isle of Armor and the Crown Tundra. Read about price, release date, eshop, new pokemon and rivals!!!

The official Pokemon Youtube account announced that 2nd part of DLC Crown Tundra will be releasing on October 22nd. The trailer includes latest footage of new contents included in Crown Tundra such as Dynamax Adventure and Galarian Star Tournament.

Learn More About The Crown Tundra Expansion From Here

Perhaps the most important point revealed in the June 2nd announcement was the fact that the Isle of Armor will be coming out on June 17th! This goes against information we received before about it releasing on June 30th.

The evolution of the Galarian Slowpoke players were able to obtain a while back was revealed - Galarian Slowbro bears similar markings on its head, except this time, the mark is colored purple instead of yellow!

Gigantamax Venusaur and Blastoise Shown Off

Gigantamax Venusaur and Blastoise also popped up during this announcement. Although this is not the first time we've seen their slick appearance, we got a chance to see more of their animations!

One of the more unexpected features revealed in this update was the Robot Cramorant. According to the official site, this is a recycling machine - if you put in 4 items, it will combine them and create a new item for you! This new item could be a Poke Ball or a PP Up.

Briefly glimpsed in the video, a new feature called "Gigantamax Soup" (English name is currently unknown). This soup will be made from ingredients found on the Isle of Armor, and if a Pokemon drinks it, it will gain the ability to Gigantamax!

Urshifu's Gigantamax form was revealed - and for both stances as well! It's not clear if the Kubfu you receive at first will be capable of Gigantamaxing right away.

The first is a fire type move which not only deals damage to all enemy Pokemon, but also inflicts a burn on Pokemon which boosted their stats that turn!

The second move is grass type and acts as a priority move if used while a Grassy Field is up!

※ The information below is drawn from the Japanese official website. When official English names are released, it will be updated!!!

This Regi is a pure Electric type which is said to have an inexhaustible supply of electricity running throughout its body.

This Regi variant is a pure Dragon type, with a soul made of crystallized dragon energy.

Information on the Legendary Birds we saw previously has been revealed - it appears they'll be Galarian versions with entirely new typings, abilities, and special moves! Check out the details below.

Check Out All New Pokemon In The DLC Here

New tournament introduced from Crown Tundra. You can now tag up and fight 2 on 2 match with your favorite character. Make your own dream match with this new tournament!

This article is based on the latest info from June 2nd. We will update this article as soon as more is revealed, so stay tuned!

The Isle of Armor will be launching on June 17th, 2020 while Crown Tundra will release on November 30th, 2020. Both expansions will be received upon purchasing the pass, which is available now!

Wrap Up Of New Info

After finishing your training with Mustard, you will get your partner Pokemon Kubfu. By challenging Towers of Two Fist with Kubfu, it can evolve into Urshifu!

Kubfu Has Branching Evolutions Depending On Tower Cleared

The Towers of Two Fists consist of two main areas; the "Tower of Darkness" and the "Tower of Waters". Kubfu's evolution will differ depending on which tower you clear!

New outfits and league card decorations will be added in this update which will allow you to dress up as Marnie, as well as many other characters.

200 Pokemon From Previous Games To Be Added

In this new Expansion Pass, you'll be able to play with some more of your old favorite Pokemon from previous games in the franchise. The Isle of Armor and The Crown Tundra will bring a total of over 200 Pokemon! This will bring the Sword/Shield Pokedex up to over 600 Pokemon!

The Expansion will feature not only the return of old Pokemon, but will also bring totally new monsters to the game! The new Pokemon Kubfu and Urshifu will appear, alongside new Galarian versions of previously existing Pokemon such as Slowpoke!

Galarian Slowpoke is the Galarian form of the Slowpoke found in previous titles. Its appetite for the Galarica seeds (a kind of spice) for generations has altered its appearance and behavior in comparison to the normal Slowpoke.

Galarian Slowpoke - How To Get

The Isle of Armor and the Crown Tundra will both feature a new story that is entirely separate from the currently released main games. New characters will also appear to help and guide you through this story. It appears that some characters will actually be version exclusive too!

Pokemon Sword will feature Klara, a poison-type trainer, while Pokemon Shield will have Avery, who uses Psychic-types.

Check Out the New Rivals Here

Restricted Sparring is a new battle mode that limits the type of Pokemon you can bring into battle. It may pave the way for new competitive modes for players to challenge!

Restricted Sparring - What Is It?

Price may depend on your country of residence!!!

With this paid Expansion Pass, you'll be able to go on new adventures in two totally new areas. The first part, "The Isle Of Armor" will release on June 30th, 2020. The second part, "The Crown Tundra" will come out November 30th, 2020. Buying the Pass will let you play both of these new adventures!

Although the new content won't be released until June, the Expansion Pass is already on sale! You can purchase on the Nintendo E-Shop on your Switch, or on the Nintendo Store.

> Check Out How To Purchase Here

You can receive Leon's outfit via mystery gift if you purchase the expansion pass before 7:59 a.m. PDT August 31st.

How To Get Early Purchase Bonus Outfits

How To Buy The DLC (Expansion Pass) - Eshop

Some Pokemon or rivals may be different between Shield and Sword. If you own both versions, consider buying both DLC (Expansion Pass) for the full experience.

How To Buy On The Nintendo Store

1: Use The eShop or The Nintendo Store

The easiest way to buy the Pass right now digitally is to either use your Nintendo Switch eShop, or the official Nintendo Store.

When you reach the page shown in the picture above, press the Prepurchase Now button for the game you own. Be careful not to accidentally buy the wrong Pass! You'll be taken to the Nintendo Store, where you'll have to fill in your info and can purchase the game.

> Check Out The Official Store Here

How To Buy On The Switch eShop

1: Look For The Pass On The E-Shop

Access the Nintendo E-Shop on your switch home page. You should see the Pass in the Featured tab. If it isn't there, use the search function to find it.

Afterwards, confirm that you have the correct pass version before buying! When you're done, press the proceed to function button.

Certain retailers may sell download cards which you can buy at the store. Once you buy that card, enter the code on it into your Switch to gain access to the Pass.

▲Participating retailers may vary according to your country of residence, as well as the time period!!!

In January 2020, there was Pokemon Direct which can be found on Youtube. Many DLC features are introduced in the video and Expansion Pass was part of it.

Anyone can change the markings. They don't matter. Do the 6 stats of the Inteleon say "Best" or "Super Training"? Also, does it have Sniper?

I traded a shiny salazzle for a shiny inteleon, the inteleon has a regular ball(cus it’s a starter) but it has 6IVs and 5 markings. Is it hacked or not? The ball makes it sound legal but the markings and IVs dont