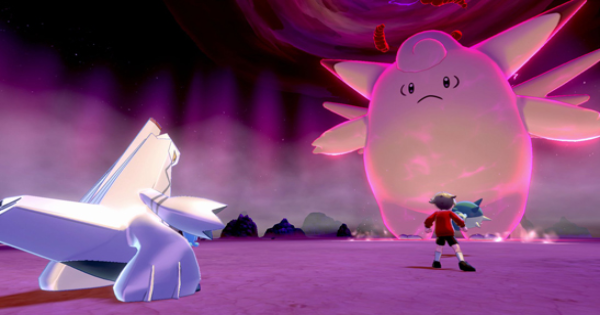 What Are Max Raid Battles?

Face Off Against Dynamax Pokemon

Max Raid Battles are a new feature in Pokemon Sword and Shield. These battles will allow players to face off and catch wild Dynamax Pokemon in a group with 3 other players.

You Can Also Face Gigantamax Pokemon

Aside from facing Dynamaxed Pokemon, there are some special cases where you will do battle against a Pokemon in Gigantamax form!

Make A Team With Friends

During Max Raid Battles, a maximum of 4 players can work together to defeat a Pokemon. You will be able to play with people on the internet or locally invite friends.

Find A Pokemon Den In The Wild Area

To join a Max Raid Battle, you will need to find a red beam of light indicating the location of a Pokemon Den in the Wild Area. Approach and interact with it to start the battle!

Dens and Pokemon Locations Are Covered In Our Article

Our Wild Area map guide provides den locations including which Pokemon appears from specific dens. Check them out to collect strong Pokemon!

There are two types of Pokemon Den pillars of light. One with a faint, red color, while the other is thick and purple. Purple pillars will have a chance of containing rarer and stronger Pokemon, as well as ones with Hidden Abilities.

Check Out What Hidden Abilities Are Here!

Every Pokemon Den will have a certain pool of Pokemon which could potentially spawn. The Pokemon that spawn in Dens can differ, even within the same Wild Area Subzone!

The Dens can also be spawned manually by using a rare item called the Wishing Pieces. These Wishing Pieces can be purchased from Watt upon unlocking the raid.

There are Pokemon suitable for Max Raid Battle to efficiently repeat the battles. Check out the below article to know which Pokemon to bring.

How Raid Dens Reset And Respawn

Your max raids reset at 0:00 of each day, resetting Pokemon in dens and respawning watts for empty dens. That means all unfinished den collection and raids will be lost when the timer is up, so pick up the pace!

Watts - How To Farm Them And Their Uses

If you are able to complete all raid battles in all dens for that day, new raids may randomly respawn for the player to challenge. Go through all Den raids for a chance for another batch of raids!

What Are Raid Den Stars

Depending on the number of stars in a Max Raid Battle, the stats of a Pokemon may differ. The more stars, the better the stats. Fight 5-star battles in order to get Pokemon with high Individual Strengths (IVs). These Pokemon can be extremely useful for breeding purposes!

What Are Individual Strengths (IVs)? Find Out Here!

Form Groups With Other Players Online

A party of up to 4 people can be formed when you opt to join raids online. You can create your own online raids or join the raids of other people. The online & offline battles are the same, except with real players the party can coordinate better.

Players will sometimes look for people to do Max Raid Battles with online. A Nintendo Switch Online Membership is required to play with people over the Internet.

Opt to Play Solo When Offline

You can fight Dynamax Pokemon with your friends locally or online. If you don't have 3 other people to play with, or does not have an online subscription, then up to three computer trainers will be added to your team automatically in your offline battles.

Computer Trainer teammates assigned to your team may have erratic behavior when raiding that does not reflect the best course of action. Try raiding with real players if possible.

Once you've defeated a Dynamaxed or Gigantamaxed Pokemon, you can try to catch it! Some of these Pokemon even have rare hidden abilities, or are able to Gigantamax.

Check Out The Gigantamax Guide!

Earn Various Rewards After the Fight

Aside from getting the chance to catch the Pokemon, you will also be able to earn various rewards from Max Raid Battles.

Check Out How To Level Up Fast!!

After the Max Raid Battle, the Pokemon Den will lose its shining light and become inactive for a while. You will need to head to other Dens or use an item called a Wishing Piece if you want to participate in another Max Raid Battle.

Wishing Piece - How To Get

Cooperate To Take Down The Enemy Pokemon

You must work together with your team to defeat the Dynamax Pokemon. It may have special attacks that you need to overcome, such as resetting stat changes or cancelling the Abilities of your Pokemon.

Only One Pokemon Can Be Used

When doing a Max Raid Battle, each player can only bring one Pokemon, so choose wisely! Also, only one of the four players can Dynamax their own Pokemon, so be careful!

Take Down the Barrier Protecting the Dynamax Pokemon

If You Fail, Try Again!

If you fail to defeat a Dynamax Pokemon, you can keep trying over and over again until you finally win. However, be careful, as the Pokemon will disappear when the date changes at midnight!

Throw A Pokeball To Catch It

Once you've defeated the Dynamax Pokemon, each player can take turns throwing a Pokeball to try to catch it! Remember, you will only get one chance to catch them per Raid, choose your Pokeballs carefully!

Check Out All New Pokemon In The Game!

Check Out How To Increase Dynamax Levels!