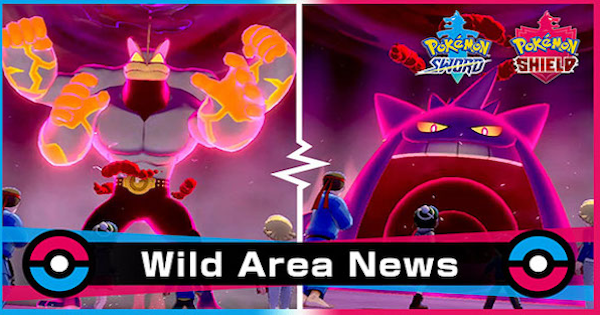 Read this Pokemon Sword and Shield guide to learn more about Max Raid Battles! Find out the latest news including raid events, schedule, and featured Dynamax and Gigantamax Pokemon!!!

Bug and Poison Pokemon Rate Up

Starting November 2nd, the boosted Pokemon appearing in the Wild Area will change over - the Halloween event is over and now instead, Bug and Poison Pokemon will appear at a higher rate. Of these Pokemon, Garbodor and Butterfree will also have a chance of being Gigantamax.

※ List includes only Pokemon we've confirmed ourselves. Previous evolutions of these Pokemon may also be obtainable!!!

Perhaps in celebration of Halloween, Ghost Pokemon will be appearing more frequently across dens in the Wild Area (as well as the The Isle Of Armor and Crown Tundra)! Use this opportunity to get access to the above Pokemon, some of which can be hard to obtain as they require trade evolution!

Some Pokemon Have A Higher Shiny Rate

Some of the Pokemon listed above are also reported to have a slightly higher than usual shiny rate, so if you participate in Max Raids enough, you might just get lucky!

The Electric and Grass Pokemon outlined below will be appearing at a higher rate during the month of September in Pokemon Dens all across the Wild Area (as well as the Isle of Armor)! Get these before they go away.

Some Pokemon Appear As Gigantamax

Of the above mentioned Pokemon that are seeing increased spawns across the wild area, we've confirmed that Toxtricity, Flapple, and Appletun are showing up in their Gigantamax variants!

The following are all the Pokemon we've been able to confirm so far!!!

Some Gigantamax Pokemon Appear As Well

The current rotation of Max Raid Pokemon has changed, with the above Pokemon popping up more frequently. Note that Gigantamax versions of Coalossal and Copperajah will continue to appear in this event as well.

A new special challenge is being held - 1 million players must defeat Zeraora in-game within 11 days. If this condition is met, all players will receive a Shiny Zeraora for free!

> Check Out The Zeraora Event In Detail Here

Starting from June 2nd, all Gigantamax Pokemon will appear in Wild Area dens! However, Pokemon that spawn will differ according to your game version, so you'll need to play online to catch all of them.

The final of the 3 Gigantamax Events this time around, Gigantamax Meowth, has arrived in Wild Areas. It will be available to catch until June 2nd, so make sure you don't miss out! This Pokemon has a great G-Max move that can be used for making money!

The second Pokemon in the most recently announced series of Gigantamax Raid Battles has arrived. This time players will be facing Gigantamax Eevee in battles across the Wild Area!

Gigantamax Pikachu is an extremely rare Pokemon that was only obtainable by having a save file of Let's Go Pikachu on your Switch. It now makes its appearance as a wild Pokemon in the Wild Area!

Other Gigantamax Events Coming Soon After

In addition to this, Gigantamax Eevee will be coming to Wild Areas starting on May 19th, followed by Gigantamax Meowth on May 26th. These 3 Pokemon were previously only obtainable by pre-order bonuses or save files, so this is an important opportunity for players to get these rare Pokemon. Gigantamax Meowth is particularly important for a key money making strategy, so don't miss it!

Although details are yet unavailable, it seems that a certain set of Pokemon which are popular in the current competitive meta are currently being encountered more frequently in the Wild Area!

No Gigantamax Appearing This Time Around

Previous Wild Area events usually included special Gigantamax Pokemon appearing, but this time seems to be different. The focus now is on increasing the spawn rate of popular competitive Pokemon. If you haven't gotten some of these key S Tier Pokemon, make sure you get them now!

As a part of the newest Gigantamax Raid Battle Event, you'll have a higher chance of encounter Gigantamax Duraludon and Copperajah in Pokemon Sword, and Gigantamax Garbodor and Charizard in Pokemon Shield!

Catch the above Gigantamax Pokemon while you still can, as opportunities to get them are limited. Some of them might even be good to try out in competitive ranked battles!

A new official Max Raid Battle event was announced. Starting from March 8th, you will be able to encounter Gigantamax Machamp & Gengar in the wild area. Gigantamax Snorlax will also be making a comeback here!

Gigantamax Snorlax is also sometimes seen in competitive online play, so don't miss this opportunity to get one!

Check Out Our Report On The Current Ranked Meta Here

For Pokemon Day 2020, Mewtwo will be making an appearance in Max Raid Battles! Take it on to get cool rewards! This Mewtwo can not be caught, however.

>> How To Beat Mewtwo Guide
>> Other Pokemon Day Events

As part of Pokemon Day events, you can catch the 6 above Kanto starters! What's more is, some of them will have Hidden Abilities, while others might drop rare items like the Flame Orb.

From January 30th to February 16th, you will be able to encounter special Milcery in the wild area. These Milcery will be able to Gigantamax after evolving into Alcremie!

During the January 9th Pokemon Direct, it was announced that a new raid event will be occurring this year. During this event you can find the following 4 Gigantamax Pokemon in Dens all across the Wild Area! The event will only last until early February, so don't miss out!

Get Magikarp From Dens!

Happy new year, trainers! From now until Friday, January 3, 2020, Pokemon dens will have an increased appearance of Magikarp. Do not miss the first max raid event of 2020!

Announced on Nov. 27, 2019, a new Gigantamax Raid will be coming to Pokemon Sword and Shield featuring the Normal-type Pokemon - Snorlax! The Gigantamax Pokemon will have a new move called G-Max Replenish!

Check Out the Galarian Pokedex Here!

Starting from the game's official release all the way up to the new year, players will be able to participate in Max Raid Battles against a Gigantamax Butterfree! Work together with your friends and defeat this formidable Pokemon to have a chance of catching it!

During the same time period, players will have an increased chance of encountering certain Gigantamax Pokemon depending on their game! Pokemon Sword players will be able to battle against a Gigantamax Drednaw, while Gigantamax Corviknight will appear more often in Pokemon Shield!

From now until Thursday, December 26, 2019, Pokemon dens will have an increased appearance of Delibird. Defeating Delibird will gift players with higher amount of Ice-type TRs & EXP Candy rewards!

To get these limited-time bonuses, you'll need to connect your Nintendo Switch system to the internet. Then, check a pillar of light shinning from a Pokemon Den in the wild area!

What Are Max Raid Battles?

Max Raid Battles are encounters with special wild Pokemon. These wild Pokemon have the ability to Dynamax or Gigantamax. To add to this, these Pokemon may also have hidden abilities that give them an advantage in battle!

Cooperate With Other Players

Max Raid Battles will require you to work with 3 other players to defeat the wild Pokemon. As Dynamax & Gigantamax Pokemon are tough to bring down, you will need all the help you can get!

Use item called Wishing Piece on empty Pokemon Den and raid battle will spawn instantly. You can purchase this item from Watt Trader in Wild Area.