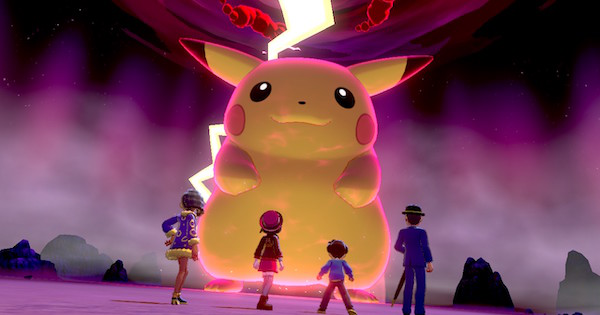 Check out this Pokemon Sword and Shield guide on the limited time Max Raid Battle Event for Gigantamax Pikachu! Includes den location, stats, moveset, how to beat, & how to get!!!

Everyone's favorite yellow mouse is making an appearance for a limited time in Max Raid Battle Events! This Pikachu will know G-Max Volt Crash, which paralyzes all targets hit by it. Additionally, there is a chance that this Pokemon will also know moves such as Volt Tackle, and Surf!

Note that at the end of this event, Gigantamax Eevee will become available for one week. Gigantamax Meowth will be available the week after that.

Gigantamax Pikachu knows the move G-Max Volt Crash, an extremely powerful move that is sure to paralyze all Pokemon it hits! Note that if you have even one Pokemon that is hit by this move, even Ground Pokemon (which are normally immune) will get paralyzed, so be careful!

Gigantamax Pikachu with their hidden ability, Lightning Rod, will also appear during this event! This is important because the Gigantamax Pikachu provided by having a Pokemon Let's Go Pikachu file could not have this ability. Get a HA Pikachu before it disappears!

Learn How To Get Gigantamax Pikachu & Eevee with Let's Go Data

Gigantamax Pikachu does not seem to spawn at any one specific den! There is a chance to find it in any den, even when there is no pillar of light!

※ The host should always have a Grimmsnarl which they immediately Dynamax!!!

※ The host should always have a Grimmsnarl which they immediately Dynamax!!!

Taunt is run here in order to prevent Pikachu's infuriating Double Team and Light Screen. By using Max Starfall, you can change the field to prevent negative status effects (paralysis) from afflicting your team!

The person who hosts the raid battle is able to Dynamax immediately, so we strongly recommend the host run out a Grimmsnarl and Dynamax it.

Gigantamax Pikachu uses Surf, which means having Pokemon that can resist it is really useful. However, watch out because if Pikachu uses Feint, you'll lose the bonus damage on Fishious Rend.

Pikachu's Surf will deal super effective damage to you, but you should be able to survive as it isn't a STAB move. If you can survive the first turn, Grimmsnarl's Light Screen on the second turn should let you withstand hits.

How To Beat Gigantamax Pikachu

On turn one, the host should immediately Dynamax their Grimmsnarl and use Max Starfall. This will prevent your party from being paralyzed by Pikachu's G-Max move.

Taunt With The Second Grimmsnarl

The 2nd Grimmsnarl (ie, not the host's) should immediately fire off a Taunt. This will prevent Pikachu from using Double Team and Light Screen, which will make the fight much easier.

Attack With Excadrill or Dracovish

Second Turn (And After)

Use Light Screen With The 2nd Grimmsnarl

If you're using an Excadrill, you'll need to use Light Screen on your second turn in order to mitigate the damage of Surf. The 2nd Grimmsnarl will thus only be able to attack starting from turn 3.

All that remains is to just keep hitting away at Gigantamax Pikachu with all Pokemon once you've set up the field initially. Pikachu has relatively low defensive stats, so if you just keep firing away at it you should be able to take it out!

Note that Gigantamax Pikachu's stats are the same as regular Pikachu.

※ The Gigantamax Pikachu you face may have a different set of moves, but the above are some which are particularly common!!!