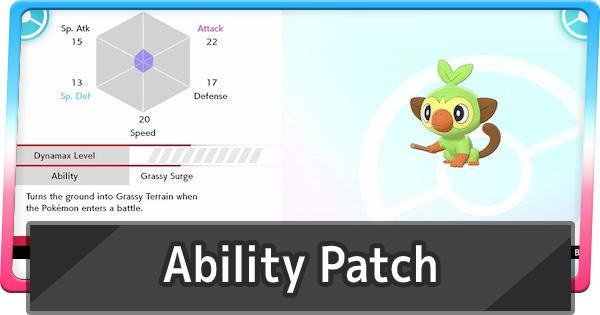 Pokemon Sword Shield
Ability Patch - How To Get

What Are Ability Patches

Get A Pokemon's Hidden Ability

An Ability Patch is a long-awaited item added in the The Crown Tundra Expansion which will switch a Pokemon's current ability to its Hidden Ability! This will give you a lot of flexibility when putting together a team of Pokemon!

The Ability Patch differs from the Ability Capsule item, which was introduced in Gen 7. Check the above chart for detailed interactions. Some effects are still unknown and will be updated when we get our hands on the Ability Patch.

Can You Revert Back To Regular Abilities?

It is not possible to revert back to a regular ability after using an ability patch! Make sure you are 100% certain before using this item on a Pokemon.

How To Get Ability Patches

This section will be updated as we learn more about the DLC!

Ability Patches can be purchased for 200 Dynite Ore, which is a new currency obtainable from Dynamax Adventures. From our experience so far, we obtained 9 pieces for the first raid. This suggests that you'll need to farm quite a lot in order to get these Patches. Make sure to use them wisely.

Check Out How To Get Dynite Ore Fast From Here

After clearing the Crown Tundra story, catch a Necrozma from a Dynamax Adventure. If you bring this Necrozma to Peony, he will give you an Ability Patch for free!

What Will Change Due To The Ability Patch?

Up until now, the process of passing down a hidden ability via breeding was somewhat complicated. However, with the arrival of the Ability Patch, this is set to change - the entire process will become much easier, as you won't have to worry about finding a Pokemon with a hidden ability in the wild!

Check Out Our Breeding Guide Here

↑ A shiny Alolan Ninetales which unfortunately doesn't have its Hidden Ability

In the process of breeding a Pokemon specifically to get its Hidden Ability, you might have come across some perfect 6-IV Pokemon, or even worse, a Shiny which didn't its Hidden Ability. These Pokemon can now be salvaged by using the Ability Patch! Check your boxes for leftover breeding rejects!

Pokemon To Use The Ability Capsule On

Legendary Pokemon from previous games will be returning to the game in Crown Tundra, and some Hidden Abilities which were previously unobtainable (like Landorus's) will now be available!

Of all the Pokemon in the Galarian Pokedex, the only ones which haven't had their Hidden Ability available in-game are the 4 Galarian Fossils! It's possible that these will be made available via the introduction of the Ability Patch.