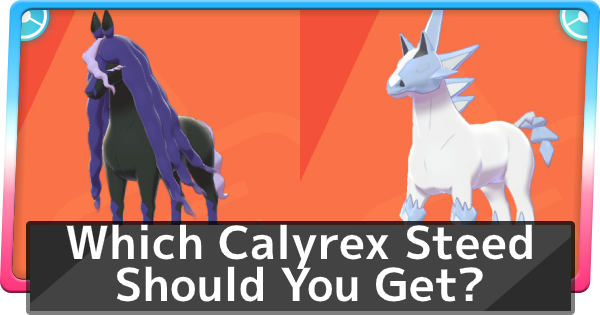 Which Horse is better to choose in Crown Tundra, Pokemon Sword & Shield's expansion? Find out here in this Calyrex steed guide, should you choose Glastrier or Spectrier, and more!

Which Horse Should You Pick?

Both horse Pokemon have the potential to be competitively viable and rather strong in their own ways, but in this case we actually recommend Glastrier.

Glastrier learns moves that are effective in the Double Battle. For example, Throat Chop which prevents the target from using moves that emit sound and High Horsepower which won't be effected by Grassy Terrain.

Glastrier's really low 30 speed allows it to put way more base stats into Defense, Sp. Def, and HP. With 4 stats over 100, this Pokemon is not only physically extremely powerful, but is also extremely bulky. The general shape of this stat distribution carries over when it fuses with Calyrex as well (although they do go up).

Abilities Boost Up Its Strengths

Spectrier Has A Lot Of Competition

Spectrier's base stats are effectively the opposite of Glastrier's. This makes it somewhat of a glass cannon, which although fast, is really lacking in defenses. Unfortunately, it has a lot more competition, especially considering that its stat makeup is rather similar to that of Eternatus. Additionally, its move pool isn't ideal.

Can Only Choose One

You will only be able to choose one of these two steeds in your story - as soon as you make the decision the story will branch off, so make sure you're certain before you decide!

Which Steed Did You Choose?

When fusing with one of his two steeds, Calyrex will lose the Grass type and gain the type of the horse it chooses. Shadow Rider will only have 2 weaknesses (Ghost and Dark), but they are both 4x. In combination with Shadow Rider's rather low defenses, if it gets hit with one of these moves, it is almost sure to faint immediately. This is contrasted with Ice Rider having a very defensive constitution ready to handle its total 6 weaknesses, especially given that none are 4x.

Both horses have a powerful move that deals damage to all enemy Pokemon. Additionally, both horses have Abilities that boost their Atk or Sp. Atk when they defeat an enemy Pokemon, making them quite lethal sweepers. The Ice Rider special ability, however, is technically slightly stronger than the Shadow Rider one.

When Do You Choose A Horse?

When You Plant The Carrot Seeds

Check Out Details In OUr Crown Tundra Walkthrough Here

To be honest I agree with picking glastrier because it can be viable in double battles because it has a great attack and you can pair it with a fast Pokémon that knows trick room so they can set the trick room and glastrier can go first with its incredible attack.

It's not about it being emo. Have you seen the face of the white one ? Wtf.