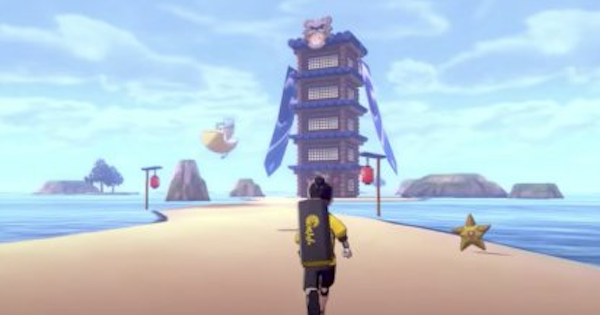 Pokemon Sword Shield
Tower Of Waters Guide - How To Beat

Guide on the Tower of Waters in the Isle of Armor (Pokemon Sword and Shield). Includes how to beat all 5 floors of Towers of the two Fists, Mustard's Kubfu, & best moves & items!!!

While taking on the Tower of Two Fists, you'll only be able to use Kubfu. Make sure you train up your Kubfu before entering. The final boss will have a Lvl. 70 Pokemon, so you want to make sure you're able to compete stats wise.

One Of Two Possible Choices

You will only be able to enter one of the two towers on the Isle of Armor, either the Tower of Darkness or the Tower of Waters. The tower you choose will determine what form and type your Kubfu will take upon evolving.

Kubfu Evolves After Beating The Tower

Depending on which tower you choose, Kubfu will evolve to Urshifu in different style. It will also gain the type of that tower when evolving too (Dark or Water).

Which Tower Are You Going To Choose?

Learn More About Urshifu From Here

How To Beat Tower Of Waters

The majority of the Pokemon here (with the exception of the final floor) are pure Water types, meaning you likely won't be able to hit them for super-effective damage. This makes this tower slightly more difficult than the Tower of Darkness.

Aerial Ace will be very handy for the final floor, while Close Combat provides you with a large damage boost. Bulk Up is there to weave between the Protects of the Pokemon on Floor 4. Counter will help you out on the final boss. Alternative moves you could bring include Brick Break and Detect.

For this challenge, you can go with a Life Orb for high damage and versatility, but you'll likely need to heal frequently between floors. Leftovers is a safe option for floors #4 and #5. Alternatives to these are the Black Belt and Rocky Helmet.

This fight is straightforward enough, we were able to take it out with 1 Close Combat.

This one might need 2 Close Combats, so it's likely safer to go for 2 Aerial Aces instead.

Same strategy as the above, nothing particularly difficult here. You can use items here, so after this fight make sure your team is topped off.

This Poliwhirl will frequently use Protect and Whirlpool, dealing over-time damage to you and being able to block some of your attacks. Consider using Bulk Up on turn 1 to time it with its Protect.

On the final floor, a surprise will be waiting for you - Dojo Master Mustard will pull off his old-man robes and come at you with renewed vigor. You'll have to take on his Kubfu 1v1.

> Check Out Other Battles vs. Mustard Here

This battle could catch you off guard if you're not paying attention, as Mustard's Kubfu also knows the flying move Aerial Ace. This means he'll be able to deal super-effective damage to you as well. It's for this reason that we brought Counter, so you can deal his super-effective damage back at him. Just be careful however, as sometimes it uses Focus Energy, which will waste your Counter turn.