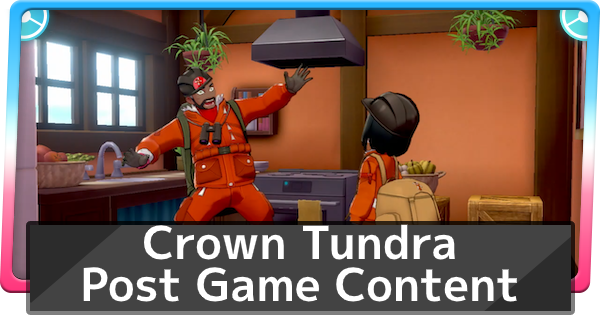 Read this post game guide on what you should do after beating the Crown Tundra in Pokemon Sword and Shield. Includes finding evidence, Ultra Beast Pokemon, & how to get Regigigas!!!

Complete All Quests & Talk To Peony

After finishing all 3 main quests given by Peony, talk to him again in his house to get his rare League Card and Gold Expedition Uniform.

Get Legendary Clue? At Peony's House

After getting the league card and uniform from Peony, you'll find something flashing on the floor of his house. Pick it up and bring it to Peony in the Max Lair entrance. After this event, Ultra Beast Pokemon will start to appear in Dynamax Adventures.

Get Poipole By Catching 5 Ultra Beasts

Even though Poipole and its evolutionary form Naganadel are Ultra Beasts, they won't actually appear in Dynamax Adventures. You can only get Poipole by catching a total of 5 Ultra Beast Pokemon. After catching 5 Ultra Beasts, an event will start which grants you the Pokemon Poipole!

Check Out More On Poipole From Here

Give Legendary Clue? To Peony

When you give Legendary Clue? to Peony, Necrozma starts to appear in Dynamax Adventures along with other Ultra Beast Pokemon.

Check Out More On Necrozma From Here

After you've caught Necrozma in Dynamax Adventures, show it to Peony and he will give you Ability Patch and Beast Ball.

Just after you've unlocked Ultra Beast Pokemon, head outside and you'll get a phone call from Leon, inviting you to join a new battle mode: the Galarian Star Tournament. This is a 2 on 2 battle which you can partner up with your rivals such as Hop, Marnie, past gym leaders, and many other characters!

How To Catch Regigigas

Since Regigigas is Normal-type Pokemon, you can defeat it easily by using Fighting-type Pokemon or moves. Unlike other Max Raid Battles, you'll actually be facing Regigigas 1 on 1, so make sure to be prepared. If you're going to Dynamax, make sure to bring a Pokemon that's bulky enough to withstand Giga Impact, as that can deal a huge amount of damage.

Learn More On Regigigas From Here

How To Catch Spiritomb

First, you'll have to visit the grave of Spiritomb in the eastern part of Ballimere Lake. Fly to the Dyna tree and head right, you'll have to go down a small hill before reaching this area. Interact with the gravestone.

Next, access your Y Comms and connect to the internet. You should start to see people on the overworld - go up to and talk to them. Do this for 40 different people, and then return to the Gravestone.

When you speak to 40 players, go back to the grave area to find Spiritomb waiting around. Save here just to be safe, then fight it! Spiritomb knows Hypnosis and Dream Eater, so either bring a lot of Awakenings, or bring a Pokemon that resists Ghost moves!

Visit A House In Freezington

If you haven't got Cosmog, visit the house in Freezington and talk to the old lady to get Cosmog from her. This Cosmog will evolve depending on the version of the game you have!

Learn More On Cosmog From Here

After you've returned the Legendary Clue? to Peony, talk to him again to battle. He will use a team of powerful Steel Pokemon around the level 74 range. Fire, Ground, and Fighting type Pokemon/moves will be your friend for this encounter!

Find all Pokemon in the Crown Tundra to complete the Pokedex. Once you've completed it, go to the Crown Tundra station and talk to the researcher there to get rewards such as the Replica Crown, a certificate, and useful items such as Bottle Caps and Rare Candies.

Check All Pokemon In Crown Tundra Pokedex From Here

As you explore the Crown Tundra, you'll find footprints of legendary Pokemon. By traveling around the continent and collecting more of these footprints, you'll be able to gather evidence to unlock legendary Pokemon from Generation V!

Catch All Legendaries In Dynamax Adventures

If you haven't captured all legendary Pokemon appearing in Dynamax Adventures, repeat them until you've caught 'em all. By talking to Peonia and paying her 5 Dynite Ore, she will also give you the location of a specific (random) legendary. Remember that if you fail to catch a Legendary, you can keep taking it on over and over!

Show Legendaries To Get Clothes

New clothing in the Crown Tundra can be obtained by showing certain Legendary Pokemon to a man in Wyndon. This will only be unlocked after you've completed the Galarian Star Tournament at least once (possibly twice).

Check Out All Clothing Here

↑ The clothing you get when you show the man a Regidrago - the clothing itself is themed around the colors of the Pokemon you show!

The Crown Tundra expansion has also brought back a ton of excellent Pokemon from previous generations. The likes of Swampert, Metagross, and Salamence are all back, so if you're interested in having the strongest Pokemon currently available, you'll have some work to do, including EV Training them and getting all your preferred abilities.