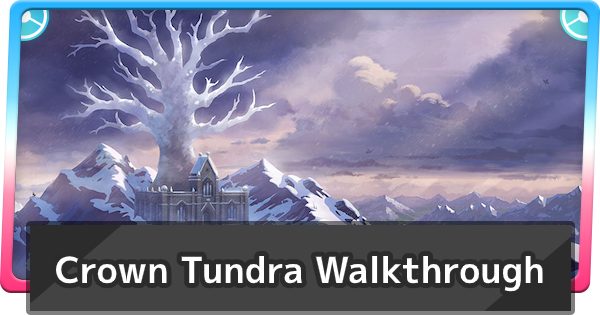 Once you've downloaded the DLC, go to Wedgehurst Station in order to get transportation to the Crown Tundra.

Peony is extremely weak to the Fighting and Ground types, so consider having one of those in your party to quickly take him out.

The boss of the first Dynamax Adventure will be Suicune. You'll want to get either Grass or Electric type Pokemon for this if possible. The Pokemon you'll be presented will be random, however, so at the very least get something that's not weak to Water!

Remember that you can also catch the Pokemon you encounter on the way to Suicune too. Make your water to a Grass or Electric raid if you see one.

At this point in the game, you will be given three separate paths you can go down. You can do these in any order you want, so don't worry.

Step 1. Use Wooden Crown On Statue

The mayor will be out in the Giant's Bed area looking at his farm. This is located in the middle part of the zone, near where you can see a shovel and a field on the map.

Step 9. Where To Plant Carrot Seeds

You'll have two options on where to plant Carrot Seeds: the Old Cemetery or Snowslide Slope. This choice will decide which Calyrex form (Shadow-rider form or Ice-rider form) you'll eventually get so think carefully!

Which Calyrex Form Did You Get?

Check Out Which Horse Is Better In Detail Here

Step 11. Get Cosmog In Freezington

After saving an old lady from Glastrier or Spectrier in Freezington, visit her house and get Cosmog from her. This Cosmog will evolve depending on the version of the game you have!

Learn More On Cosmog From Here

The first thing you'll want to do is explore the island, and by doing so, unlock the flight points at each temple. The locations of the temples of each Regi are listed above. Note that the Regice temple is in a somewhat secluded location.

It's Ok To Defeat Regis!

You Must Catch All Regis To Proceed

Note that in order to truly "finish" the Crown Tundra story, you will have to catch all three old Regis. If you don't do this, you won't be able to enter the Regieleki and Regidrago temple.

In order to get into the Registeel temple, you'll have to perform a whistle right in front of the door! To do this, simply press the left control stick on your Switch. After doing so, the door should open and you'll be able to enter and fight Registeel.

To enter this temple, make the Pokemon at the head of your party hold an Everstone and then interact with the door. Any Pokemon will do for this.

To enter this third temple, catch a Cryogonal and make it the head of your party. You can find one of these in the grass immediately near the temple, as a symbol encounter!

To enter this final temple, bring Regice, Registeel, and Regirock in your party to get the door to open! Note that you can only choose one of the two Regis to fight! You won't be able to catch the other Regi, so choose carefully.

Choosing A Regi To Fight

In order to activate the statue in the middle of the room, you'll have to draw the eye pattern of the Regi you want on the floor! You'll be able to confirm which type you unlocked before you take on the Regi, so don't worry.

Which Regi Should You Get?

As you can see from the base stats of each Pokemon above, the only difference between these Pokemon (other than their type) is their HP and Speed. Regieleki's outrageous 200 speed is, in our opinion, too good to pass up. If you have two versions of the game, you will of course want to get both.

Check Out The Guide On Which Regi Is Better From Here

Which Regi Are You Picking?

Get Regigigas After Catching All Legendary Giants

After catching all legendary giants, you can catch Regigigas by bringing 5 other Regi Pokemon in your party and check the den in Giant's Bed.

How To Catch Regigigas

Learn More On Regigigas From Here

The first part of this quest is simply to scatter the 3 birds across the world. Galarian Zapdos will go to the Wild Area, Galarian Articuno will stay in the Crown Tundra and Galarian Moltres will go to the Isle Of Armor!

How To Get To The Dyna Tree

In order to get to the Dyna Tree from Freezington, you need to cross the river near the Old Cemetery.

Step 2. Location Of Legendary Birds & How To Catch

Galarian Zapdos's special move "Thunderous Kick" can lower your Pokemon's defenses. What's worse is, it also knows Reversal, which deals more damage the lower its HP is. For this reason, we strongly recommend bringing a Ghost type Pokemon for this fight.

Gets Tired After Being Chased

Once you find Galarian Zapdos in the Wild Area, chase after it on your bike. At first you won't be able to get close to it, but if you keep up the chase the bird will start to tucker out and slow down. Approach it diagonally to reduce the distance you travel and you'll be able to catch it before you know it.

Galarian Moltres can use the move Nasty Plot, which strongly buffs its Sp. Attack. If it uses this 3 times, you'll be in for a world of hurt, so we recommend either disabling it (via sleep) or bringing a Taunt user.

Get In Its Line of Sight or Whistle

Although we aren't 100% sure of this, we found that when you get close to Moltres and whistle, it will fly toward you and attack you. However, Peony's hint also mentions that you merely need to get into Moltres's line of sight to fight it. We're not sure which of these is the real trigger for the event, but in either case you'll have to approach it to start.

Galarian Articuno's special move Freezing Glare can, despite being a Psychic move, freeze your Pokemon. Try using a Dark-type Pokemon to gain immunity to Psychic moves!

Look At Its Wings

When you approach Galarian Articuno, it will clone itself in an attempt to confuse you. However, if you look closely you should notice that one of the clones has its wings raised up. This is the real one!

Save Before It Clones

Although the same can be said for all birds, we recommend saving before you engage them in battle. This is especially true for Articuno, as if you mess up guessing the clone, it will fly away!

What To Do After Beating Crown Tundra

After finishing all quests in the Crown Tundra, report to Peony to get his rare League Card and the Gold Expedition Uniform.

Check the flashing object on the floor in Peony's house to get a Legendary Clue. Go to the Max Lair and give it back to Peony. Ultra Beasts will start to appear in Dynamax Adventures now!

The Galarian Star Tournament unlocks only after beating all 3 paths in the Crown Tundra. Once you get access to it, you'll be able to pick your favorite partner and participate in 2on2 battles!

There's still a lot left to do after beating the main story of the Crown Tundra, so don't give up just yet. You can try finding evidence to unlock more legendary Pokemon, catch Regigigas, and even get Ultra Beasts in Dynamax Adventures!

Learn More On What To Do After Beating the Crown Tundra

in my first dynamax adventure i had tapu fini at the end of it.

How do u get to the crown shrine?