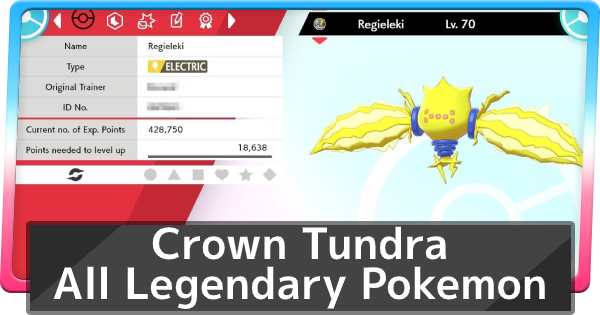 Check out this list of Legendary Pokemon in the Crown Tundra, the Pokemon Sword & Shield expansion. Find a list of all legendary Pokemon added by generation, & how to get them!!!

New Legendaries In Crown Tundra & How To Get Them

Past Legendaries & How To Get Them

Most Are Found In Dynamax Adventures

Generally speaking, the majority of old legendaries can be obtained by doing Dynamax Adventures. Acquiring them is more or less random, and some of them can be quite strong. If you fail to defeat them, you'll get the option of retrying as well.

Is It Possible To Shiny Hunt?

Though it may take time, it is in fact possible to get shiny versions of Legendary Pokemon in Dynamax Adventures. You have a 100% chance of catching these Pokemon, so all things considered it isn't as bad as it could be!

Some Are Not From Adventures

Some of the past legendaries added back to the game in Crown Tundra are not available via Dynamax Adventures. They will have to be found in specific locations across the world after specific conditions are met. These include:

The Swords of Justice trio can be obtained by finding footprints (Evidence) all over the Crown Tundra. Search around every area of the zone to find their steps and track them down.

Technically speaking, Ultra Beasts are not "legendaries" per se, but they have some things in common with them so we will list them here as well.

Although Victini has not been officially announced to be part of the Crown Tundra release, many players have been speculating about its addition. Currently, there is no known way to obtain Victini in-game. If this changes, we will update you with more information!

※ The following is a list of Legendaries which were (re-)added recently or are obtainable in the Crown Tundra!!!

I don't think so