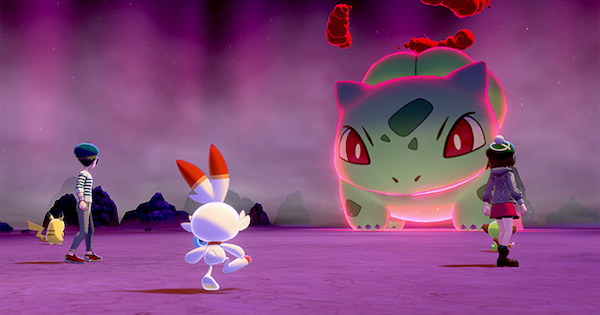 Read this Pokemon Sword and Shield article about the Kanto Starter max raid battles & rewards. Find out what they drop, like the Flame Orb and Toxic Orb, berries, and more!!

Alongside the special Mewtwo raid event, you'll be able to encounter the first 2 evolutionary forms of Kanto starters all across the Wild Area. Unlike Mewtwo, the Kanto starters are catchable! It's worth noting that there is currently no other way to obtain Bulbasaur and Squirtle in game, so make sure to get them!

Not A Guaranteed Catch

It seems that even when playing alone or as the host of a given raid battle, you will not always necessarily catch the starters. Go into the raid battles with this mindset to avoid disappointment!

The Kanto starters appearing in the Wild Area also have a chance to have their Hidden Ability! This is an extremely rare opportunity, so it's worth spending some extra time to get these.

Since there are several raid battle events going on at the same time, it's currently somewhat difficult to target Kanto starters specifically. Keep this in mind if you run out of Watts.

Check Out The Best Way To Farm Watts Here!

Charmander and Charmeleon have been confirmed to drop the rare Flame Orb item, in addition to the usual Berries and Exp Candy. It's not a 100% chance, but it's certainly faster than grinding out the Pokemon tournament!

Check Out More Info On The Flame Orb Here!

Check Out A Guide On All Berries Here!

The following is a list of some items that could potentially drop. They are not all guaranteed.