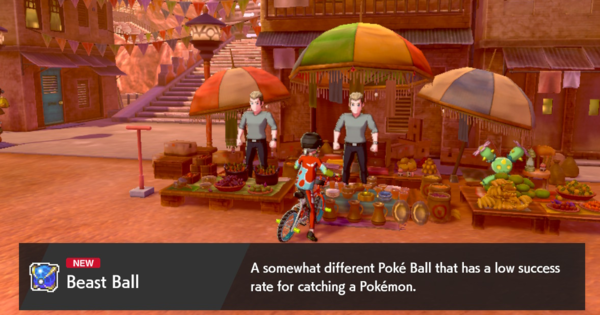 Pokemon Sword Shield
Beast Ball - How To Get & Effects

Check out this Pokemon Sword and Shield guide on how to get a Beast Ball. Find out where you can get it and what it does, & Effects!!!

How To Get Beast Ball

Receive 1 At Stow-on-Side After Beating The Game

After beating the game & becoming champion, go to the Street Market located at the Stow-on-Side. The Vendor there will give you a Beast Ball to commemorate you for your effort.

May Be Given Randomly From Tournament Ball Guy

After beating the game, players can play Tournament again. When choosing to fight Leon and progress with the fight, a Ball Guy would give the player random items, including rare Pokeballs! Beast Ball may be included in the reward list, so farm the Tournament!

Make Some Money Along the Way

Farming Tournament not only rewards Pokeballs, but also tons of money! Why not boost your savings as you try to get some rare Pokeballs?

How to Earn Money Fast

Beast Ball Effects And What It Does

Bragging Rights For A Tough Catch

As there are no Pokemon Sword and Shield right now, Beast Ball is a great way of showing off one's power in nabbing a Tough Pokemon with even lower catch chance. Be the Awe of the field when you toss out your Beast Ball!

Yamper has the Ball Fetch ability that lets it fetch the Poké Ball from the first failed throw of the battle. Use a Yamper to conserve your pokeball.