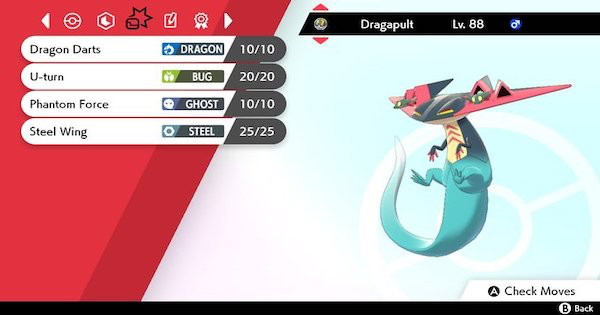 Dynamaxed Move
Refers to the original move that becomes a Max Move.

(+ or - Number)
Indicates the stage multiplier bonus of the stat (ie, Swords Dance is +2 Attack).

Aim For A Dynamax Full Sweep

This build allocates more EVs into defensive stats & combines that with a Weakness Policy in order to be able to withstand hits from a wider variety of opponents. Once you've activated your Weakness Policy and used Max Airstream, their combined offensive and speed buffs should allow you to sweep through the entire enemy team.

Specialize Against Fairy or Steel Types

Although this build requires you to have one Flying-type move in order to boost your speed with Max Airstream, there is still some room for customization. You will be able to choose if you want to deal with Steel types (by choosing Fire Blast) or Fairy types (by choosing Steel Wing). Steel Wing is preferable due to it being physical, but if you lack a way of dealing with Steel types on your team, definitely consider Fire Blast.

Get A Slight Advantage Against Mimikyu

If you choose Steel Wing as your 4th move, you will also be able to raise your defense with Max Steelspike. This will have the bonus effect of increases your chances of surviving vs. a Mimikyu!

Use Tanky Pokemon With Resistances

When it comes down to a pure fistfight, Weakness Policy builds will often have the edge. Avoid engaging this Dragapult with standard attackers and instead use Pokemon with high defensive stats and recovery abilities. When possible, refrain from hitting Dragapult's weakness so you don't activate the Weakness Policy. Also bring a Pokemon that has a way of preventing defense drops.

Use Priority Moves Or Trick Room

Max Airstream makes it very difficult to outspeed a Dragapult, but it is possible to deal with it using priority moves like Shadow Sneak and Sucker Punch. Trick Room is also another viable option to turn Dragapult's speed against it.

Dragapult possesses 120 Attack and 142 Speed stats. It is a must-have attacker Pokemon for competitive teams. It is also quite flexible, able to handle special & physical attacks. The Pokemon's appeal comes from its flexibility in different situations.

A Huge Variety Of Moves

Dragapult possesses a wide variety of attacks. Note that this build is not a cookie cutter build, so consider making adjustments to this build by adding in moves that cover your type weaknesses.

Clear Body And Infiltrator Are Both Good

Clear Body works well as a counter to other abilities such as Intimidate, but Infiltrator is better for piercing through Light Screen & Reflect. Consider breeding two Dragapults in order to have different options when the meta shifts.

Steel Wing is mainly included here to deal with the ever-present Mimikyu. If you Dynamax, you should be able to survive even one Swords Dance boosted Shadow Sneak & take out Mimikyu.

Whether it be the Focus Sash, Choice Scarf, Life Orb, or Weakness Policy, Dragapult has a great pool of viable items to choose from. When using the Choice Scarf and Weakness Policy, make sure to consider what opponents you'll be using it against & adjust your EV spread accordingly.

A Deadly Special Attacker Too

This build packs even more power into Dragapult's Draco Meteor and Fire Blast, allowing it to one-shot a Ferrothorn. Currently, we recommend breeding multiple Dragapults in order to stay flexible. Use them as you notice the meta shifting.

This Pokemon can struggle against Mimikyu due to the lack of Steel moves. Consider running U-Turn instead of Thunderbolt if you continue to struggle.

Dragapult's extraordinary speed makes it an incredible leading Pokemon which can set up the field for the rest of its team by quickly paralyzing or burning opponents. This build is seeing increasing popularity in the meta!

The move Hex deals 130 damage if used against a target with a status condition. Considering this is a STAB move, it can often be enough to take out opponents - there are surprisingly few Pokemon in the meta that resist Ghost moves.

Although Cursed Body is quite strong, Infiltrator works best for this build, as you can get through substitutes and land your Will-o-Wisp or Thunder Wave easily. Cursed Body disables opponents moves, which is also viable, but your priority should be to apply status conditions with this particular build.

Since you will be burning your opponents, you will not have to worry about being one shot by physical attacks. This means you can take a bit longer to recover. Leftovers are ideal for this build.

Dragapult doesn't need to rely on an item or ability to get its walls up - it simply outspeeds the opposition! It does struggle somewhat in terms of durability, but it will usually be able to last long enough to set up walls and support the rest of your team.

Able To Defend Itself

Dragapult is not a Dual Screener that can be easily pushed around, due to its high attack power. If Dragapult is in an advantageous position, it can forgo setting up walls and go straight for the kill.

If you feel that you already outspeed most threats without EV investment, it's recommended to put points into Defense instead. This can allow you to outlive, for example, Hydreigon's Dark Pulse, Dragapult's Dragon Darts, and a Swords Dance boosted Mimikyu's Shadow Sneak.

It is recommended to boost Speed & Attack with the Base Point, along with topping off its defense with the extra EVs.

This spread is for Build #2, which focuses on Special Attacking moves.

Setup variants don't need the attack and would rather have the extra HP cushion in order to survive another turn.

How To Play Against Dragapult

Dragapult is one of the most common Pokemon in the current meta, alongside Mimikyu. It can be extremely hard to counter if you're not prepared for it. It's best to assume that most teams online will run this Pokemon, so having a clear counter is a must!

Mimikyu is a Strong Counter

Mimikyu can not only negate Dragon type moves, but can also boosts its attack while Disguise is in effect, & strike with moves such as Shadow Sneak. Note that Dragapult can also evade Mimikyu with the use of U-turn, breaking Disguise & switching into a better Pokemon, so think ahead!

Grimmsnarl's Life Orb or Choice Band boosted Sucker Punch will one shot Dragapult & get priority on it. When anticipating a Sucker Punch, swap into Grimmsnarl (as it is immune).

Use A Choice Scarf

One of the only ways to get the first hit on a Dragapult will be to use a Choice Scarf. Hitting it with a strong super effective move should be enough to disable it. Although Scarf Dragapults are uncommon, they might be out there, so be careful!

The first step to Breeding Dragapult will be to catch either a wild Dreepy or Drakloak. Head to the Lake of Outrage in the Wild Area to find these Pokemon. Note that these area requires you to travel on water & will only be accessible after the 6th Gym.

2 fire blasts in the special build? Is this a mistake?