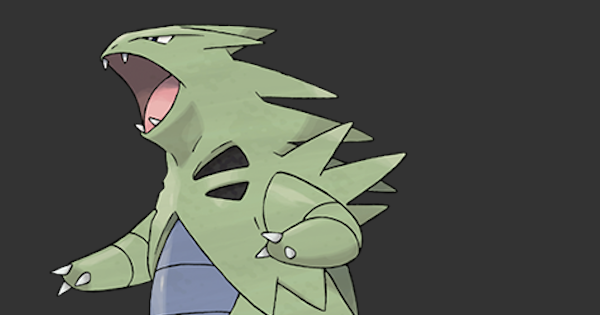 Although we have recommended 252 HP / 252 Atk, you can also take some of those attack EVs and place them in Defense or Sp. Def. For example, if you put at least 20 in Defense, you can survive an Adamant Excadrill's Earthquake. Consider what kind of opponent you will send Tyranitar out against & customize your build to handle the situation!

Despite having multiple weaknesses, Tyranitar's tankiness allows it to withstand several hits. With the exception of some fighting moves, it can soak up several super effective hits & live to tell the tale! Dynamaxing gives you even more leeway to sustain damage, so it comes recommended.

Know When To Retreat

As mentioned above, Tyranitar can't afford to take a Superpower or Close Combat. Even if you've procced Weakness Policy, if you think your opponent has such a move, consider retreat!

Tyranitar already has fairly decent stats, and has a significant special defense boost in Sandstorms. As such, he can afford to invest EVs in Attack. The Choice Band build can apply serious pressure against some enemies, forcing them to switch. Use these opportunities to read your opponent's actions and act accordingly.

Tyranitar Is Not A One Man Army

It might be somewhat difficult to sweep an entire team with Tyranitar, given how prominent physical tanks are in this meta. Make sure you play his strengths off another Pokemon in your party and plan your switch outs carefully. Also, beware of fighting moves.

Tyranitar's fairly decent 95 Sp. Atk already lends itself well to taking out enemies with a 4x weakness (think Ferrothorn, Rhyperior, Gyarados, etc). However, we recommend 252 EVs in Sp. Attack in order to improve matchups vs Pokemon that only have a 2x weakness to Tyranitar's moves.

Surprise And Take Out Physical Tanks

The main draw of the special attack build is that it can deal with physical tanks that Tyranitar is normally weak to. However, simply switching Tyranitar into a tank might be a bit too obvious, so be careful. Generally speaking, most people won't be able to predict a special build just from seeing it in your party, so use the element of surprise to your advantage.

Not As Powerful As Physical Variants

Compared to Tyranitar's stellar 134 Attack, its 95 Special Attack isn't exactly amazing. It also lacks good STAB special moves, so do not expect it to be able to one shot like a physical build would. Use this build specifically to gain an advantage over particular physically defensive Pokemon.

Since the Assault Vest in this build will be giving you extra bulk, you can devote half of your EVs to improving your offenses. It is also possible to opt for 252 Defense instead of Attack, depending on your preference. Sp. Def EVs are unnecessary for this build.

This particular variant is so bulky that it can withstand a Choice Spec Modest Lucario's Focus Blast. With an unmatchable 200+ Sp.Def, this build can withstand almost any attack, so switch it in liberally.

Less Firepower Than Other Specs

This build lacks a damage-boosting item, which can be a bit of a problem. Try to focus instead on predicting your opponent's switches and getting an advantage in that way. Consider running Rock Tomb to lower the speed of incoming Pokemon.

Although we have featured an Impish HP/Defense build here, you could easily go for Jolly HP/Speed if you wish. The important thing is to consider your party's needs and who your ideal opponent is.

Set Up For The Rest Of Your Team

This build focuses on setting up Stealth Rock, and perhaps paralyzing an opposing Pokemon before swapping out. Due to its incredible base stats, Tyranitar has a lot more leeway than leads, and can act as a potent attacker after it's successfully done it's job.

Speed is by far Tyranitar's biggest weak point, so supplementing it to ensure it goes first in a few matchups can be useful.

This build makes use of Sandstorm's 50% buff to Special Defense to turn Tyranitar into a surprisingly lethal special defense wall. Pair this build with an Assault Vest for even better results.

How To Play Against Tyranitar

Tyranitar will take x4 damage from Fighting moves, which can be lethal even considering how bulky it is. However, it has a high chance to survive the attack during Dynamax, and it could run Weakness Policy, which is quite dangerous.

Most of Tyranitar's attacks are Physical moves, which can be countered with Physical tanks. Moves like Will-O-Wisp or Burn effect from Scald can take it down with ease.

Due to its lack of Speed, it is unlikely that Tyranitar will be able to attack first unless it is equipped with a Choice Scarf. Tyranitar also doesn't have healing moves, and can be whittled down with following party members.

How To Get Larvitar

Am I missing the Earthquake/Leftover build? The one used at the last finals in China?

it cant use close combat

It can learn DD. Breed it with Haxorus

I thought the move Pursuit was removed from the game