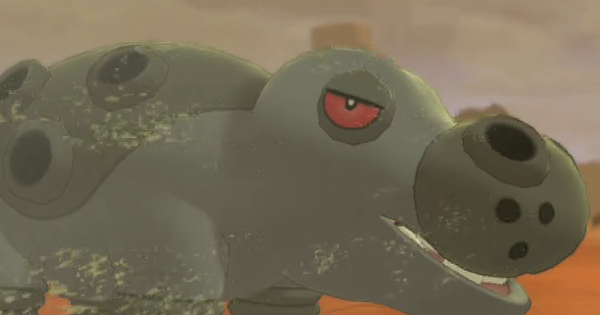 Find out how to breed Hippowdon in Pokemon Sword and Shield! Learn about Hippowdon's best competitive movesets, best builds, best nature, counters and the breeding process!

Hippowdon's excellent HP and Defense allow it to thrive as a tank in the current meta. Access to Yawn also makes it frustrating for sweepers (particularly Dynamaxed Pokemon) to play against, as you force them to swap out.

Hippowdon, just like Tyranitar, can summon a Sandstorm when it enters the battle. This will wear down some enemy Pokemon & could be a strong buff to your team. Try it out with Pokemon like Excadrill!

Yawn and Stealth Rock Are A Must

Although the above mentioned two moves are a must, the remaining two can be chosen with relative flexibility. Fire or Ice Fang are also worth considering, while Slack Off can provide a lot of potential for recovery.

Watch Out For Sleep Prevention

Max Lightning and Max Starfall prevent status conditions, so they can stop your Yawn strategy in its tracks. If the opponent Dynamaxes, be ready to react with a Dynamax of your own.

Most Hippowdons in the current meta are Yawn variants which set up Stealth Rock, whereas this one focuses entirely on physical attacks. Physical attackers are generally reluctant to go up against a Hippowdon, so they're likely to switch out into a special user. At this point, you can use the element of surprise to overpower your opponent with raw damage.

Although Hippowdon's HP and Defense are his main draws, this build benefits most from a damage boosting item like a Life Orb. Assault Vest variants are also very possible.

HP is a must, but you can change the Defense EVs into Special Defense if you see fit.

This build goes all in on Attack to overpower opponents. Consider a Life Orb or Choice Band here.

How To Play Against Hippowdon

Hippowdon can be a pain to play against if you let it Curse over and over. It's important to get a Pokemon that does super effective special damage to take it out. Choice Spec Wash Rotom will take it out in 1 shot (in most situations).

Hippowdon is not Rock type, which means it doesn't get the Sp. Def bonus that Rock types do during Sandstorm. As such, it's best to target it with special attacks.

It's almost inevitable that Hippowdon will put one of your Pokemon to sleep, so make sure to be ready for it when it comes. Either bring a Lum Berry to cure it, or choose a Pokemon that can live through the sleep.

Non-offensive variants will typically only run Earthquake. After the initial Stealth Rock damage, you won't be in much danger of taking damage from Hippowdon. Just be careful, as Hippowdon might put you to sleep and switch out to let another Pokemon set up.