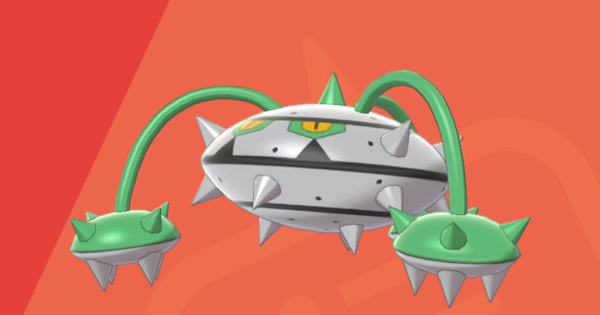 Find out how to breed Ferrothorn in Pokemon Sword and Shield! Learn about Ferrothorn's best competitive movesets, best builds with Knock Off, best nature, & the breeding process!!!

In order to maximize the power of Gyro Ball, make sure you have 0 Speed IVs! Your EVs should be funneled into HP & Defense for this build, but if you anticipate taking special damage, it's okay to put the Defense EVs into Sp. Def as well.

Ferrothorn is extremely resilient against physical attackers, which are quite common in the current online ranked meta. Since Hidden Power Fire was removed, dealing with Ferrothorn has become more difficult for some Pokemon - use this to your advantage!

This build is specifically designed to win the 1v1 vs a Leech Seed Ferrothorn. With Knock Off & Curse you can get a significant advantage over your Leech Seed / Protect using opponent.

In order to maximize the power of Gyro Ball, make sure you have 0 Speed IVs! Your EVs should be poured into HP and Defense for this build, but if you anticipate taking special damage, it is okay to put the Defense EVs into Sp. Def as well.

This build is focused entirely on dealing damage and recovering with Leech Seed. Try to read your opponent's switches and plant a Leech Seed, then stall with Protect. However, note that Leech Seed doesn't work on Grass-types!

Although you will still take some damage, use Protect to mitigate it and buy time during your opponent's Dynamax. Just be careful, as Protect can be rather easy for your opponent to predict.

This Build Loses To Curse

It's important to remember that this build will lose to Ferrothorns running Curse/Knock Off. If you see a Ferrothorn on your opponent's team, it might be a good idea to avoid bringing yours, or bring a fire move.

Most Ferrothorns in the meta right now are physical tanks, so this build is quite a deviation from the norm. Just by doing this, you'll be able to have the element of surprise on your side. Ferrothorn's Attack is not particularly high, but it has powerful STAB moves which can deal great damage with a Choice Band.

The Fourth Move Is Up To You

We strongly recommend Gyro Ball, Power Whip, and Knock Off for the power and utility, but the final move can be chosen at your discretion. Bullet Seed can pierce through Disguise and Substitute, while Bulldoze is useful in that it lowers speed. You could also run Explosion to deal massive damage as a last resort, but watch out for Ghost Pokemon, as they are immune!

Harder To Use Than In The Past

The Choice Band build has seen a lot of play in previous generations as well, but this time around many Fairy Pokemon have learned the move Mystical Fire, making things difficult for a non-tank Ferrothorn. Focus on using this build to deal with Water and Ground types only.

How To Play Against Ferrothorn

The key with Ferrothorn is to have a fire move ready to go on your team. A strong special attacker that can learn Mystical Fire can also do, like Hatterene.

Get Rid Of Its Leftovers

Use the move Knock Off to disable Ferrothorn's Leftovers. This will make it significantly easier to deal with. Rillaboom is a good candidate here, as it is also immune to Leech Seed.

For a more offensive build to be paired with a Choice Band.

How To Get Ferroseed

The first step to Breeding Ferrothorn will be to catch a wild one. Ferroseed can be found on Route 4, while Ferrothorn are much rarer and can only be found during Snowstorms in the Dusty Bowl. It's best to try to hunt for a Ferroseed first.

How To Get Leech Seed

Leech Seed is an Egg Move for Ferrothorn, which means it will need to have it passed down by another Pokemon that already knows it. This can be done by putting the two Pokemon in the Nursery while Ferrothorn has an empty move slot. The move will then be passed down. You can easily check which Pokemon you need with our Egg Move Search Tool.