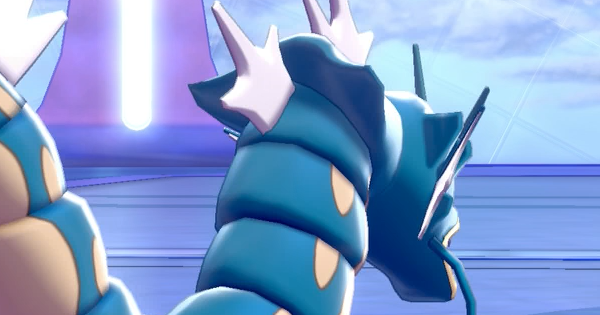 The following is a part of our upcoming series of builds provided by Japanese Pro players! This guide is provided by Konoe!!!

With a high base stat of 540, Gyarados is quite the menace, especially with its high Attack and Sp. Defense stats. Its Defense is somewhat low, however, but this can be offset by using the ability Intimidate, as well as by its superior stat typing. With just a one stage speed increase, it can act as a formidable physical attacker for your team.

This Dynamax Ace build focuses on increasing your Attack stat via activating Moxie, and your Speed stat by using Max Airstream. By doing this, you'll easily get to a stage where you can easily sweep your opponent's entire team.

Taunt And Dragon Dance Are Viable Too

This Dynamax Ace build should try to maximize its move variety, as it is specialized in being offensive. In order to get past several tank Pokemon common in the current meta, however, it might also be a good idea to teach it Taunt. Dragon Dance is also a good option for buffing yourself up even when you're not able to get Dynamax off.

In general you should run a Life Orb, but if you're finding you get burned by Will-o-Wisp a lot, a Lum Berry is recommended. If you want to further improve your offensive ability, go for the Life Orb, and if you want something a bit safer, get the Lum Berry.

How To Counter The Dynamax Ace Build

Dealing with the Dynamax Ace build is best done using Pokemon that have natural resistances to Gyarados's attacks. Ferrothorn in particular is ideal here!

Gyarados has a serious 4x weakness to Electric moves, making them an obvious method of dealing with it. If the opponent's team composition seems to lean towards their Gyarados, try to send in Pokemon that know Electric moves!

It's important to note that a Dynamax Gyarados will have a substantial pool of HP that might let it survive a non-STAB Electric attack. Don't expect to be able to one-shot it in all instances - try to deal some damage to it ahead of time.

All of the information above, including EV distribution, counters, and moves, has been provided to us by the Japanese Pro Player Konoe.

Gyarados is particularly great at sweeping teams due to a high attack stat of 125, & access to the move Dragon Dance (boosts Attack & Speed).

By bringing Bounce, Gyarados can use Max Airstream while Dynamaxed. This is key because it boosts speed in addition to being a powerful STAB move. Combined with Moxie, it can make Gyarados an unstoppable force.

Use Bounce to get up in the air, making your opponent miss an attack and waste one turn while Dynamaxed (if you yourself aren't already Dynamaxed, that is).

Freedom With Your Item

We've chosen the Lum Berry here as it deals well with status conditions like Burns, but in reality you can choose almost anything. Consider a Wacan Berry to reduce the effects of Electric-type moves.

Optional: Run Taunt To Set Up On Tanks

You can drop one offensive move in favor of Taunt to specialize in setting up Dragon Dance vs Tanks. This build works particularly well against the likes of Hippowdon, or other tanks that rely on status/recovery moves.

Gyarados can be a strong physical tank, as it cuts the opponent's Attack with its ability Intimidate. Its Flying type also allows it to dodge Ground-moves and it resists Fighting-moves, both of which are common coverage moves in the meta. Gyarados can also learn Thunder Wave to set up an advantageous playing field for your next Pokemon.

Boosting Speed and Attack with the Base Point is recommended for an offensive Gyarados. The Speed EVs are particularly important in supplementing its mediocre Speed stat.

For a Defensive Gyarados, HP & Defense will be key. You'll want to send this out against physical threats.

How To Play Against Gyarados

Gyarados has multiple ways to further boost its abilities through Moxie or Dragon Dance. Use tank Pokemon such as Ferrothorn and Galarian Corsola to make sure its ability does not trigger

Use Dynamax to Withstand Attacks

Using Max Guard to bypass its attack rush is also a viable tactic. Dynamaxing will also boost your HP, giving you a cushion to survive.

Watch Out For Sweeps

In the current meta, Dynamaxing and sweeping with Moxie and Max Airstrike is a common strategy, so make sure you are prepared to deal with it when it happens.

How To Get Magikarp

The first step to Breeding Gyarados will be to catch either a wild Magikarp. Luckily, this Pokemon is very easy to capture and is found on Route 2, Route 4, Route 5, and Route 6. You can also just catch a Gyarados directly in the Lake Of Outrage (Wild Area).

This is so helpful, thank you!