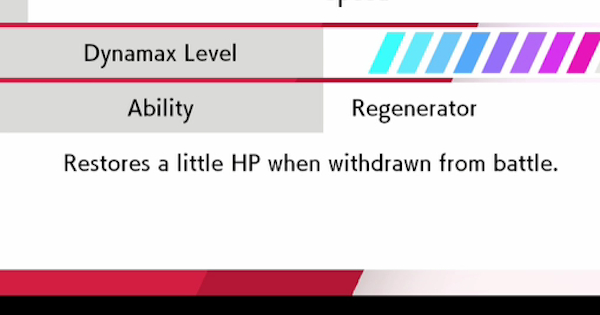 Pokemon Sword Shield
Hidden Abilities Recommendation & How To Get

How To Get Pokemon With Hidden Abilities

Do Raids To Get Hidden Abilities

Pokemon you catch in Max Raid Battles sometimes have a hidden ability. For example, the picture above is a Toxapex with its hidden ability "Regenerator". Normal wild Toxapex only have Merciless or Limber, so if you're looking for the hidden ability, you'll need to do raid battles to get it.

Trade For A Pokemon With Hidden Ability

Another way to get a Pokemon with hidden ability is through trading. Someone might have the a spare Pokemon that has the hidden ability you want that is up for trade! Head out to the forum below for a potential trade!

Hidden Abilities can also be passed down through breeding. If the female parent has a hidden ability, it can pass it down more easily by breeding with any Pokemon with same egg group.

If The Hidden Ability Pokemon Holder Is Male

If The Hidden Ability Pokemon Holder Is Female

If The Hidden Ability Pokemon Holder Is Gender Unknown

Inheritance Chance Is Around 50%

The chance that a child inherits the parents's hidden abilities is around 50%. Keep breeding until the desired ability shows up.

Recommended Hidden Abilities & How To Get

Use Pixilate With Hyper Voice

Hyper Voice is a normal-type special attack which has power of 90. By using this move with Pixilate, you can deal high damage to all opponents. Hyper Voice can be learned by using TR42.

Raid Battle vs Sylveon With Pixilate At Lake Of Outrage

Go to the Lake of Outrage & find a den located nearby the lake. If you see a purple pillar of light coming out, you have a chance to find Sylveon with its hidden ability.

Regenerator is a great ability to improve Toxapex's tankiness, as its Defense and Sp. Def are already high from the beginning and it learns moves like Will-O-Wisp and Recover to increase survivability. Also, don't forget to make it hold Black Sludge as well.

Go to North Lake Miloch and you will see two Pokemon den in the lake. Find the den located on the border of South Lake Miloch.

This hidden ability bounces back the opponent's Max-Move effects as well. See the table below for Max-Move that lowers status.

Find Out More about Dynamax & Max Moves From Here

Fly a taxi to Hammerlocke Hills and move east. The first Pokemon den you will find is the one which spawns Corviknight.

This ability prevents the use of one move used on Galarian Corsola, making it difficult to defeat quickly. Using this ability with Strength Sap and Will-O-Wisp improves survivability drastically.

When Gyarados with Moxie defeats an opponent with Max Airstream, the flying-type Max Move, it boosts its Attack and Speed, which is the same effect as Dragon Dance.

What Are Hidden Abilities

▲Corviknight's "Mirror Armor" was one of the first confirmed Hidden Abilities!!!

Hidden Abilities are special abilities which normal wild Pokemon do not have. They are often very useful abilities, so make sure you catch one to maximize your Pokemon's potential.

What Are Abilities & Hidden Abilities

The gyrados den never gives me gyrados. It has given me mantine, wailord, literally any other Pokemon.