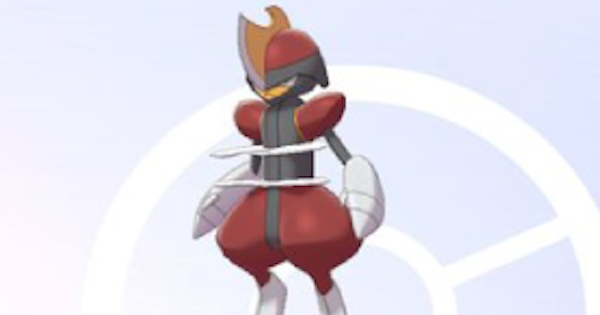 Find out how to breed Bisharp in Pokemon Sword and Shield! Learn about the best competitive movesets, best builds, best nature, counters and the breeding process!

Sucker Punch Is Your Go-To Move

Bisharp's main strength is its STAB, high power Sucker Punch, which it can also supplement with Swords Dance. Because Sucker Punch gets priority if the opponent uses an attacking move, Bisharp is particularly effective vs. dedicated attackers.

Bisharp's STAB Steel and Dark type moves give a wide reach in terms of opponents it can take out. It works especially well against Mimikyu, Tyranitar, and Togekiss.

Bisharp's Ability "Defiant" boosts its attack whenever a stat is lowered. This means that when it's hit by Intimidate, its attack will actually increase by one stage. This also discourages the opponent from using Max Moves which lower stats (this includes the Dark, Dragon, Ghost, Bug, and Normal Max Moves).

The move Metal Burst deals damage equal to 1.5x the damage dealt by the opponent's previous attack on Bisharp. This works particularly well if you equip a Focus Sash on Bisharp to ensure it can survive a massive hit.

Speed and Attack are the main stats you want to focus on for Bisharp. However, it's possible to put 252 in HP instead of Speed, as you'll be relying on Sucker Punch for priority anyway.

How To Play Against Bisharp

Use Pokemon That Resist Dark Moves

The two main things to watch out for when it comes to Bisharp are Sucker Punch and Swords Dance. If you send out a Pokemon that takes normal damage from Dark moves, you run the risk of being 1-shot by a boosted Sucker Punch. Bring out something that can resist Dark moves (Fighting, Dark, and Fairy types).

Send Out Pokemon That Have Status Moves

If you only use attacking moves, you will constantly be hit with a priority Sucker Punch. Consider bringing Pokemon that have at least one support move. If you can predict its Sucker Punches, you'll be able to get a move off for free.

It goes without saying, but you cannot afford to let Bisharp boost its attack with Defiant. Make sure you don't use Max Moves which lower stats, and avoid Pokemon with Intimidate. Be careful when using Corviknight's Mirror Guard ability, as Bisharp can use that to buff its own stats.

Tanks Should Watch Out For Guillotine

Very occasionally you might come across a Bisharp which runs Guillotine, which will one-shot your stalling tank. This isn't so common, but some people might be running it as a Hail Mary option.