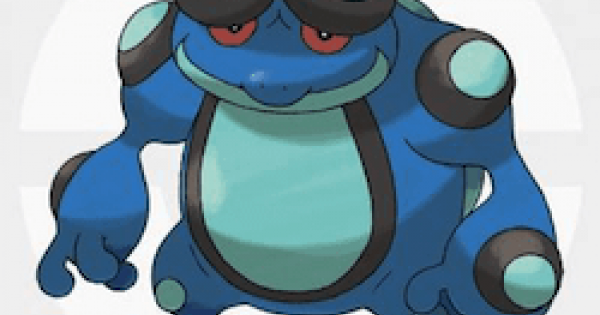 Find out how to breed Seismitoad in Pokemon Sword and Shield! Learn about the best competitive Seismitoad movesets, best builds, best nature, counters and the breeding process!!!

Seismitoad is now capable of providing its own rain to activate its ability Swift Swim, meaning its speed will increase by 2 stages and its attack stats by 1! This effect is even better than max Airstream, making Seismitoad an incredible Dynamaxing ace.

While under the effects of Swift Swim, Seismitoad can outspeed a Charizard with a Max Airstream buff. Combining this excellent speed with excellent move variety allows it to take on a wide range of opponents.

Dynamax aces are typically weak to Yawn users. However, Seismitoad can one shot Hippowdon, Gastrodon, and Quagsire, not allowing them to even get a taunt off in the first place. This is something that other priority Dynamaxers cannot do!

Capable Of Taking A Hit

Seismitoad's HP/Def/Sp.Def stats are 105-75-75, with its only weakness being grass. It is more than capable of with standing a hit and then turning the tide using Max Geyser.

By syncing Dynamax with your opponent, you can stall out their Dynamax by using Max Guard - Max Geyser - Max Guard. This will allow you to set up your Rain while avoiding the majority of your opponent's moves. At the end of Dynamax, you should come out on top due to the Swift Swim bonus. To do this, run at least one status move!

Try To Get A Max Ooze Off

Max Move raises your Sp. Attack by one stage, meaning that if you combine this with the Rain boost, you'll be almost unstoppable. Depending on the roll, you'll even be able to one shot a 252 HP Corviknight!

Learned The Physical Move Of Its Dreams

In Sword and Shield, Seismitoad finally got access to a good physical Water-type move in the form of Liquidation, thus paving the way for viable physical builds. In addition to this, it learned Power Whip, giving it a good Grass move as well.

This build is essentially very similar to the previous special variant: it has incredible speed and an excellent move pool. The main difference is that your offense-boosting move is now Max Knuckle. Power Whip + a damage boosting item can even one shot Wash Rotom! However, it's worth noting that this build is not capable of one shotting a Hippowdon.

Set Up On Rotom!

Due to its Ground/Water typing and Water Absorb build, this Seismitoad build can completely block out Heat/Wash Rotom's moves. Aim to set up Stealth Rock and Toxic asap. This build is also strong against Dracovish and other Seismitoads.

Not Suited For Taking Hits

If you compare it to Pokemon that fill a similar role such as Quagsire or Gastrodon, Seismitoad is direly lacking in an HP recovery move. This means that it doesn't function that well as a tank - getting out your hazards and dealing damage should be priority here.

Watch Out For Unexpected Grass Moves

Due to its 4x weakness to grass, Seismitoad really needs to watch out for rogue Power Whips or other strong moves, as they will likely one shot you. Mimikyu and Dragapult both can learn grass moves, so if you want to deal with that specifically, consider a Rindo Berry to decrease the damage.

This build focuses on being a Dynamax ace! Offensive stats are the way to go.

This build focuses on being a physical Dynamax ace.

This build doesn't focus as much on dealing damage, but rather on taking hits and setting up on Rotoms. HP is better than offensive stats here.

How To Play Against Seismitoad

Take It Out As Fast As Possible

Seismitoad is quite good at dealing with bulky Pokemon due to activating its own Swift Swim with Max Geyser. If Rain is still up, you'll be in a lot of trouble, so it's highly recommended to deal with it within 1 or 2 turns. The longer it stays out, the more dangerous it is.

Seismitoad's sole weakness is Grass, but it happens to be 4x. Even if it Dynamaxes, you should be able to take it out in one shot with the right Pokemon. Bring a Pokemon with an unexpected Grass move and take it out fast. Alternatively you could use Freeze-Dry, as it also does 4x damage.

Seismitoad relies on Rain to proc its Swift Swim and outspeed you. If you overwrite its weather with your own, you'll probably be able to go first again. Consider overwriting it with Sandstorm or a Drought user asap.