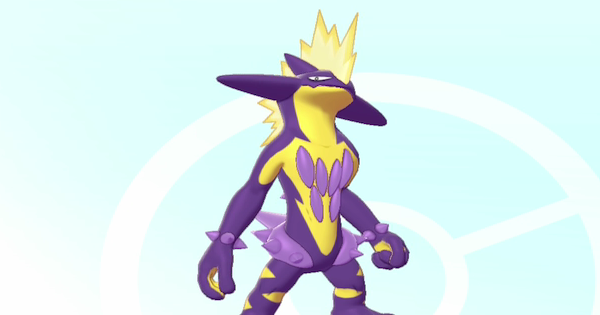 The numbers here are stat values at level 50!!!

The attack EVs here are specifically chosen to deal with a certain subset of Pokemon that are likely to be used to counter Toxtricity. After dealing with these threats, you'll be mostly using Boomburst and Overdrive, so the remaining EVs will go into Sp. Atk.

Speed can be increased by using Shift Gear, so we've only allotted a small amount of EVs to it.

Aim For A Full Sweep

Toxtricity's Shift Gear move, available only in Amped Form, is the key to this build. Using it will increase your Attack 1 stage and Speed 2 stages, allowing you to supplement Toxtricity's rather mediocre speed stat.

Use Its Resistances Effectively And Buff Up

Toxtricity has a rather high 8 resistances, including Fairy, Electric, and Grass. Aim to set up on these types of Pokemon. Shift Gear's main purpose is the speed boost, but its attack increase is also quite excellent, allowing it to deal significant physical damage too.

Ferrothorn and Excadrill are capable of resisting 3 of Toxtricity's main damaging moves, the non-STAB Boomburst, and other Electric and Poison moves. As such, you should expect that they'll be sent out to deal with your Toxtricity.

It's for this reason that this build sports Fire Punch - if your opponent has nothing but Excadrill and Ferrothorn to deal with Toxtricity, you'll be able to put a stop to their plans easily.

Use Physical Moves To Take Down Counters

Toxtricity's 98 Attack isn't exactly high, so it's not recommended to specialize it in physical damage. Instead, use physical moves sparingly in situations where your special moves won't work well. Select moves which are effective against Pokemon that might be sent in to counter you.

When considering choices aside from Fire Punch, Drain Punch is a great candidate. This is due to several factors, including how well it deals with Tyranitar, which has pesky resistances to Normal and Poison moves. Drain Punch also works well against Excadrill and Ferrothorn as well. Finally, since Drain Punch restores your health, you can keep yourself alive while continuing your sweep!

Additionally, it's also useful for dealing with Snorlax, which has frustratingly high Sp. Defense and might be difficult to take out otherwise.

Throat Chop is here to deal with Ghost types, which are immune to normal moves. The main culprit here is Dragapult, which can be easily defeated (provided you have Stealth Rock up and Dragapult doesn't have defensive EVs).

Most Pokemon that have a high Sp. Def can take hits from Toxtricity easily. Snorlax is a great reliable choice that can even withstand a +1 Drain Punch so long as it has some Defense EVs.

Teaching Snorlax a Ground move will let you easily take Toxtricity out.

Bringing out a Pokemon that resists Toxtricity's main moves is another safe bet. Normal, Poison, and Electric will usually be its main moves, so bringing something like Rhyperior, even if it may have low Sp. Def, is a good bet. Its high Defense and ability Solid Rock will let you survive Toxtricity's hits long enough to take it out.

Fight Back With Mimikyu

Mimikyu's Disguise ability, as well as its immunity to Normal moves make it excellent for dealing with Toxtricity, being able to handle even a Shift Gear buffed Toxtricity. It has a decently high Sp. Def stat and won't be hit by any super-effective moves from Toxtricity, Mimikyu should be able to survive even without Disguise up (unless Toxtricity Dynamaxes.)

Trick Room and Swords Dance are also powerful tools for taking out Toxtricity.

Toxtricity's unique Poison and Electric type gives him access to moves like Toxic, as well as making him formidable against Water-based threats in the metagame such as Gyarados & Toxapex.

Have An Escape Route

Toxtricity can be particularly weak to ground moves, so it's important to switch out when you feel a ground move is coming. Pokemon that work well with it are Gyarados, Togekiss, and Corviknight, due to their flying typing.

Gear Shift To Buff Up

Toxtricity has access to a rather rare move called Shift Gear, which increases Attack by 1 stage and Speed by 2! It is incredible for setting up and sweeping. Use it on a target that can't deal with Toxtricity and set up.

G-Max Wildfire is a move unique to Gigantamax Charizard. It deals 1/6th of the opponent's health in damage for 4 turns. This works excellently at whittling down the health of an opponent you nearly knocked out.

Unfortunately, with this build Charizard becames unable to use Max Flare, and thus can't set up its own sun. It is thus left with the ability Blaze. In terms of raw damage output, it's better to go for the Solar Power build instead of focusing on damage over time.

This build can work as a Choice Specs user to take out large threats with Discharge or Sludge Bomb.

Adamant nature is best for this build, which can improve type coverage by adding Fire Punch. A Life Orb might be beneficial for this build.

How To Play Against Toxtricity

Toxtricity's biggest weakness is its low speed stat. Look for an opportunity to switch to a Ground type. Keep in mind that some variants might run Fire Punch vs your Excadrill/Ferrothorn.

The first step to Breeding Toxtricity will be to catch a wild Toxel on Route 7. However, you can actually get a free Toxel in the Nursery on Route 5.

Why is there Charizard move set???

Thanks for the feedback regarding Discharge/Overdrive. We've applied those changes to the article!

I know discharge has a 30% chance to paralyze, which punishes switch ins, but its worth mentioning overdrive has extra 50% power due to punk rock and hits through substitutes. This makes it better in a lot of circumstances.