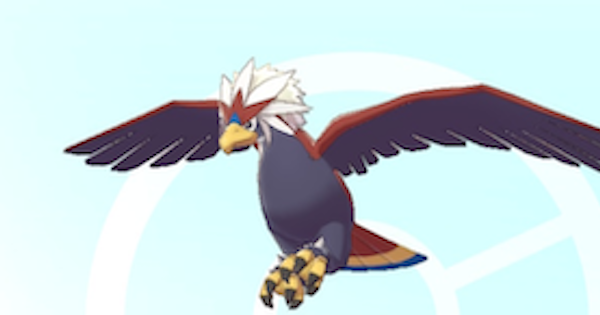 Braviary's main appeal is its STAB Max Airstream which can help boost its speed. By doing so, you will be able to outspeed basically anything. Although Close Combat actually loses power by becoming Max Knuckle (120 -> 95), the Life Orb helps make up for that lost damage.

The damage Life Orb deals to its user is based on the Pokemon's pre-Dynamax HP. This means that while it normally deals 10% HP in damage, while Dynamaxed, you'll effectively be taking only 5% each turn. For this reason, we recommend using this build mainly with Dynamax.

Braviary's Hidden Ability Defiant raises its Attack 2 stages whenever a stat is lowered. This makes it particularly effective against Intimidate and Dynamax, as many Max Moves lower stats. You can also reflect your Max Flutterby vs. an enemy Mirror Armor Corviknight to get the attack boost too.

Switch Out With U-Turn

Bring Bulk Up For Max Guard

Although it's possible to use Bulk Up just to boost stats, it also gives you the option of Max Guarding through an opponent's Dynamax. If your previous Pokemon was taken out by a Dynamaxer, switch in Braviary and Max Guard to survive long enough to Dynamax yourself and sweep.

Braviary's main purpose is to sweep opponents while Dynamaxed, so maximizing offensive stats is the way to go.

How To Play Against Braviary

Whatever you do, avoid using stat lowering moves, as they will massively buff Braviary. When combined with the speed boost from Max Airstream, this can lead to your entire team being wiped out in no time. Leave out Intimidate users and be careful with your Max Moves.

Its Defenses Aren't That Great

With 75 in both defensive stats, Braviary would fall easily if it weren't for the massive HP cushion provided by Dynamax. If you buy time until its Dynamax is over, you should be able to take it out quickly with a super effective move.