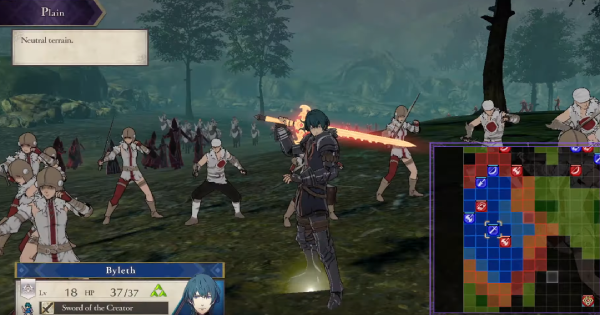 Chapter 1: The Fourth House - A Skirmish in Abyss Battle

As you delve to the Abyss, the underbelly of Garreg Mach Monastery, you and your students are confronted by a mysterious team, calling themselves the "Fourth House".

Chapter 2: What Lies Beneath - Ambush In The Arena

The Ashen Wolves require your assistance to fight off an unknown force bent on Destroying the Abyss. A trap has been set for them, but the plan also seemed to have snared a dangerous opponent.

Chapter 3: The Rite of Rising - Search For The Chalice

As the group set off to search for a Chalice rumored to possess unlimited power, weird contraptions suddenly appear to fight them.

Chapter 4: Danger in the Dark - A Harrowing Escape

Your party flees through the depths of the Cathedral, pursued by countless enemies. You must fight your way to the end as a group and escape unscathed.

Aelfric has been kidnapped by an unknown group of bandits, and its up to you and your new students to save him. But is everything the way it looks like?

Chapter 6: Return to Me - The Rite of Rising

The group is beset by a terrible betrayal and is forced to confront a foe who threatens to summon a terrible evil into the world.

Chapter 7: Wolf Pack - A Beast in the Cathedral

You have finally confronted the nightmare hidden deep beneath the Cathedral. It is up to you and your students to rid this monstrosity once and for all.

A Beast in the Cathedral Battle Strategy Guide

A mock battle between houses. The stakes aren't quite as high, but coming out victorious is a goal for you and your new band of students.

Check Out the Rivalry of the Houses Wakthrough

Your first mission with your house leads you straight to the Red Canyon where thieves are holding their defense. This is the first battle where you can use the Divine Pulse.

Chapter 3: Mutiny in the Mist - The Magdred Ambush Battle

The Knights of Seiros has come to lend you a hand as you make your way through a foggy forest to confront the rebel, Lenato.

Check Out The Magdred Ambush Walkthrough

You and your house are tasked to prevent mysterious criminals from getting into the goddess' tomb. This is where you come across the fated Sword of Creation.

Check Out the Assault at the Rite of Rebirth Walkthrough

A sacred weapon has been stolen and you must face them down to retrieve it. Although the enemy there is more than you could have expected.

Chapter 6: Rumors of a Reaper - The Underground Chamber Battle

The mystery thickens as you come face-to-face with the formidable Death Knight. All in an attempt to rescue a friend.

It's time to show the fruits of your labor as you go against the other houses to see which will come out on top in this no-holds-barred battle.

Check Out the Battle of the Eagle & the Lion Walkthrough

Chapter 8: The Flame in the Darkness - The Remire Calamity Battle

A strange sickness has overcome the Remire village. You and your house set out to see what has become of the once peaceful village.

Chapter 9: The Cause of Sorrow - Salvation at the Chapel Battle

You join forces with your father to take down the cause of the sickness that invaded Remire.

Check Out the Salvation at the Chapel Walkthrough

Chapter 10: Where The Goddess Dwells - The Sealed Forest Snare Battle

You prepare for a showdown with those that murdered of your father. Revenge seems imminent, but there are greater forces at play here.

Chapter 11:Throne of Knowledge - Conflict in the Holy Tomb Battle

You proceed to the Holy Tomb to gain divine revelation, only to be ambushed by the Flame Emperor. What is revealed next will send shock waves across the world.

Check Out Conflict in the Holy Tomb Walkthrough

Chapter 12: To War - The Battle of Garreg Mach Battle

The dice is thrown, and the world trembled as war approaches the Monastery.

Chapter 12: Onset of a Power Struggle - The Battle of Garreg Mach

You have stood your ground against deities to protect what you felt was right. Now you must lead your new allies into battle, against those you once called friends.

To strike into the Leicester Alliance, a key bridge must be captured first.

The fall of Alliance is at hand, but Claude also has certain tricks up his sleeves to prevent that.

Your point of operation is once again under siege from Church forces.

Chapter 16: The Lady of Deceit - The Siege of Arianrhod Battle

A fortress with unknown defense mechanism must be taken to bring the fight into the Kingdom.

3 factions forces clash at the Tailtean Plains to determine the fate of Fodland.

Chapter 18: To the End of a Dream - The Fight for Fhirdiad Battle

The world burned as the desperate Rhea unleashed her final gambit. Its time to end this now and here.

Beat the Game? Check out New Game Plus Guide Here!

Click on the Quest Name to see the Walkthrough!!!