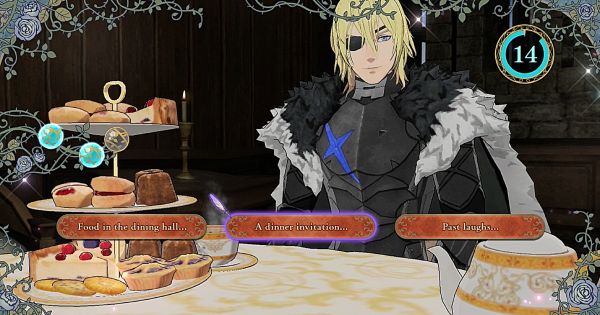 Read this guide to know more about Fire Emblem: Three Houses' Tea Party. Learn more about how to effectively use it, its effects, & how it can help you in the game!!!

Tea Party - Effects And How to Unlock

Bond With Other Characters

On certain days, the player can hold a Tea Party and invite another character to join it. The player is then given a chance to deepen bonds with the invited character. Holding a Tea Party requires 1 Activity Point and Tea Leaves. Tea Parties can also be done by directly talking to characters.

Characters From Other Houses Can Join Too

For the player to be able to invite characters from other houses, a Support Level of C or above is required. If you have a character that you like in other houses, be sure to raise their support level so you can invite them to a Tea Party.

As the availability of characters are random, there are times that your invitation will be rejected. You can either wait for them to be available or you can reload the game and ask them again. Reloading can be very useful especially if you're aiming to bond with a specific character.

Once a Tea Party is over, the player can again invite the character to another Tea Party. You can spend all your Activity Points on one character for Tea Parties. However, they might refuse as the replies are random, which can be remedied by simply reloading the game and asking again.

Click Here To Know How to Easily Restart The Game!

The Tea Party can be unlocked on 6/7 by completing the side quest, "Tea for Two" from Ferdinand. If you want to immediately take advantage of the Tea Party, it is recommended to do this quest immediately.

Tea Party - How It Works

How the Tea Party turns out depends on what type of tea you bring to the table. Knowing a character's taste helps as this can help you get that coveted Extra Time! Not using your partner's favorite tea lowers your chances of getting to Extra Time as making a single mistake locks you from progressing to the fourth dialogue.

Flow Depends On Your Choices

The Tea Party can have a maximum of 4 conversations. The player is offered 3 choices in each conversation and choosing the correct one strengthens the bond with the invited character, and also allows the player to proceed further to gain more bonuses. The default number of conversations is 3 and it can be raised to 4, provided the player has been successful in carrying the conversation.

Knowing your invited character's personality, dislikes and hobbies, certainly helps in helping you figure out the appropriate choices. Check out the Roster to get more detailed information about them.

Check Out This List For More Info About Characters In The Game!

Successfully answering three times rewards the player with Extra Time. In Extra Time, you can observe the character for clean screenshots or give gifts to further boost the bonuses.

Always Get The Right Answer

By completing a battle quest obtained from Constance, you can unlock the ability to always see the correct answer in Tea Parties! This is extremely useful, so do this if you have the DLC.

Check Out More Info About The Cindered Shadows DLC Here!)

Tea Party - How To Get Tea

Found Within The Monastery Or As Rewards

Tea can be acquired through a number of ways. It can be picked up from places within the Monastery walls, be bought from merchants, or rewarded by completing quests or defeating enemies. Take your time in exploring every corner of the monastery as new tea leaves pop up every month.

Completing the quest "Clearing the Way" unlocks two new merchants, with one merchant selling an unlimited supply of tea leaves. If you prefer to woo characters using the power of tea, best prioritize this quest.

I was expecting this guide to actually have more than just tips, but alas, I am very disappointed. I will go elsewhere for a better walkthrough on tea time.

What happens if I joke to them???
Let me love Felix
Felix my love,I will not have him hate me for jokes ;-;