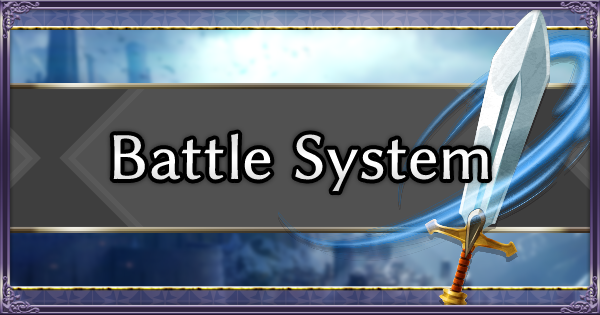 Find all you need to know about Fire Emblem: Three Houses' battle system. How do you double attack? How do you get items in the battle? Know all of these by checking this guide!!!

Select Characters You Want In The Battlefield

In the Battle Prep menu, the player can choose which characters to field in the battle. The number of units you can deploy in the battle are limited. Field characters that you want to level up or increase their bonds.

Units With Green Highlight Must Join

In the Battle Prep → Units menu, Characters that have a green background are required to join the battle. Be mindful of this as they take up a deployment slot.

Increase Members You Can Deploy By Checking This How to Recruit Guide!

The starting positions of characters vary depending on the battlefield but the player can swap character positions via the map screen. Remember this as there are times that the game automatically places ranged units in the frontline, requiring the need to rearrange them.

In the Battle Prep menu, selecting Inventory allows the player to alter the equipment and the abilities of each character. Regularly check each character's equipment before a fight as they might be bringing old or low durability weapons to a difficult fight. Also, remember to remove items acquired in previous battles to prevent your characters from having a full inventory in the middle of a battle.

Shop Before A Fight!

In the Battle Prep screen, the player can access the shop via the "Marketplace" to replenish consumables, buy new equipment, and replenish Battalions. Just make sure to reequip them before starting the battle.

After selecting "Fight!" in the Battle Prep screen, the battle begins. Battles are turn-based with each side being able to move and attack with all owned character during their respective turn. Once certain conditions are met, the battle ends with either a defeat or victory.

Its Okay To Pass A Turn

There is no need to move each character each turn and sometimes, it might even be better to skip the whole turn. Skip a turn especially if you think that maintaining a defensive strategy is better than advancing towards enemy positions.

Opening the menu in the middle of the battle allows the player to choose "Auto-Battle". Auto-Battle automates a player's turn. Choosing this feature opens up four different strategies that the team will follow for the duration of Auto-Battle. The player can cancel Auto-Battle anytime.

Auto-Battle does not uniformly distribute the experience to all characters and it also does not prioritize bonding. If you want to level up specific characters or increase bonds, manually directing your troops is the way to go.

High AS Doubles The Attack

Check Out The Best Classes For Double Attacks Here!

Counterattacks And Enemies Can Strike Twice

Counterattacks and enemies can also strike twice, provided that their attack speeds are 4 points higher than the attacker/defender.

Attacking targets within the range of your allies will bring up a Linked Attack. Linked attacks are stronger than normal ones as it increases the attack's Hit Rate and Avoid Rate, reducing the chances of an enemy counterattack. Might also increases depending on the characters involved in the Linked Attack.

Linked Attacks are not showy and are executed like normal attacks. You can check if the attacking character will perform a linked attack via the Combat Forecast.

Weapon Durability decreases whenever the player attacks or uses Combat Arts. Once durability reaches zero, the effectiveness of the weapon will dramatically decrease and will also increase the likelihood of receiving a double attack.

Magic, like weapons need to be equipped. While they don't have durability, they can only be used for a set amount of times per battle. Magic usage is replenished after a battle.

Healing Magic Is An Exception

Battalions grants additional stats to the characters they are attached to. If possible, attach battalions to all your characters.

Battalions Can Level Up

Like characters, battalions can also level up. They gain experience together with the character they are attached to. However, do bear in mind that their levels are limited by their maximum level.

Characters with Battalions attached to them can make use of "Gambits". Units hit with a Gambit will be rattled, inflicting status effects on them. The player can only use them for a set number of times during each battle. Gambit usage can be reset by using "Replenish" in the Battalion Guild menu.

Similar to Linked Attacks, Gambit Boost is when a character uses a Gambit on a target within an ally's range of attack, raising the Mt and hit rate of the Gambit. The effect is strengthened depending on the number of participating units and their respective support levels to the attacker.

Team Trading and Using the Convoy

Trade Items With Your Teammates Mid-Battle

Characters can trade items with teammates provided that they are located at an adjacent tile. Support other units by providing them with much needed support items or replacing their broken weapons.

Take Items From The Convoy

The Convoy acts as the team's storage for weapons and items. By storing items in the convoy, you can take out items even while in the battle without being limited by capacity! Only the main character and characters adjacent to the main character's tile can access the convoy.