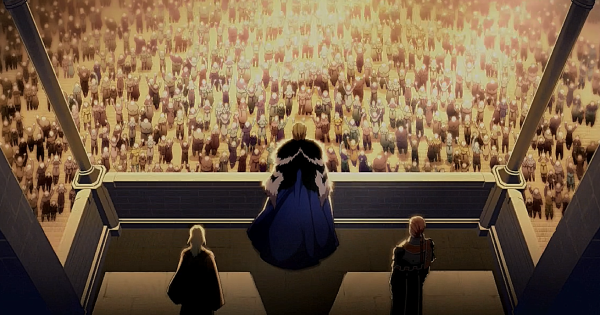 Start of the Harpstring Moon Chart

4. Rest of the Month Continue Tips

With the upcoming battle, it's necessary for you and your allies to be stronger. Throughout the month, set up level and skill goals to achieve before the day of the battle.

Stock Up on Supplies, Fix Up Weapons

Do not forget to visit the marketplace before going into the month's mission. Ensure that you have all the healing items you need and all your weapons are at their best!

Win Condition is to Defeat Cornelia

With magical turrets, multiple Titanus, and tons of other enemies, the fight might seem daunting, but don't worry. The only goal is to defeat Cornelia. Do so and the fight will be finished regardless of how many are left.

No Major Choices in Dialogue Cutscenes

Throughout the dialogue cutscene at the end of the battle, there will be no major decisions. Most of them are just conversations that in no way affect the flow of the story.

Prioritize Taking Down the Turrets

Once the Turrets have been activated, they'll damage a nearby enemy with every turn. There's a lever at the top of the right path where the kill switch is. Do not go into battle without turning them off first!

Assign a Flyer / Fast Moving Unit to the Right Path

Get to the switch as quickly as possible by using Flyers or Horse-riding units to get to it. Ensure that they have backup though as there are mages lined up there.

The major fight in this stage will happen from the top - middle of the map since this is where Cornelia is. On the left path, you'll have access to a smaller path that goes straight to her. Be careful though as there will be a Titanus there.

Leave a Unit Behind to Defeat the Thief

In the middle of the fight, a thief will appear at the left path with the unique Tathlum Bow in hand! Take him down to get it before he can escape!

Assign Units to Draw Away Titanus

The Titanus are hard hitting and extremely tough. Fighting them head on is too risky. It's better to draw them away from Cornelia by using an extremely tough unit as aggro bait. Heavy Armored classes are the best for this.

Head Straight for Cornelia Once Titanus are Distracted

Without the Titanus, Cornelia will only have archers as backup. Close in on her and take her down. Assign your most powerful units to take her down in a single turn.

For the replies to Dimitri in the post battle for Chapter 18 (Azure Moon) all of them turn out as neutral, if you need that information. I noticed it still says "To be confirmed" so

What turn does the thief come on?