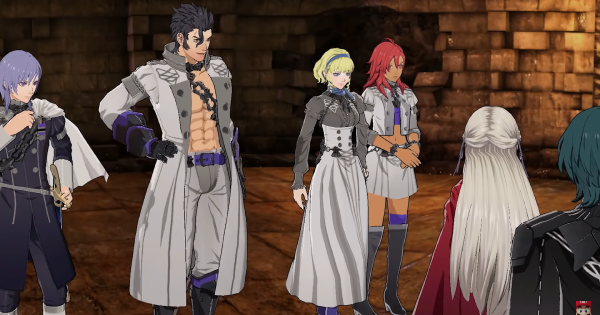 The story of Cindered Ashes is separate from the main story and must be accessed from the main menu. You'll be prompted to make a character & choose the difficulty before starting.

DLC Save Data Will Be Separated

Since the Cindered Shadows is a side story, the save data for this DLC will be separate from the main game. However, you will be able to scout new characters and access to Abyss once you've made progress on DLC to certain point.

There is no Maddening mode available for the DLC content, The Normal/ Hard, Casual/ Classic modes are still there for you to choose from though.

What Is Included In Ashen Wolves DLC?

The DLC will focus on a new side story titled "Cindered Ashes". Taking place during the pre-time skip Academy days, Byleth and their houses will discover a secret 4th House and a new location to explore!

When you start the Cindered Shadows, you'll be given a set of characters to work with.

In the Abyss, you'll meet the secret 4th House, the Ashen Wolves. Comprised of only 4 students, this House does not have a teacher of their own.

The Ashen Wolves will have 4 new students that you can recruit and romance. They are named Balthus, Yuri, Hapi, and Constance. There will also be older version of them as well.

Four new classes will be added; Trickster, War Monk/War Cleric, Dark Flier, and Valkyrie. All four of the new characters will have one of these new classes. They will also be usable in your main game as well after you've beaten Ashen Wolves Episode 1.

In the DLC, you'll open up a new location to explore in Garreg Mach. It's a dark & dank underground area called the Abyss.

You can get renown by offering a materials such as food and ores. Since the weapons and items are limited in Abyss, you use renown to exchange with those items.

The former professor of Officers Academy appears in the Abyss. By talking to him, he will evaluation how much your character has grown by fighting with you.

In the second part of the Cindered Shadows, Astrologer appears in the Abbys. By consuming renown, you can increase the Support Level of two characters you've chosen.

There are also books stored in the underground archive. Perhaps there might be some secret books which Seteth have thrown away?

Upon clearing the DLC, you will receive a new item known as a Chalice of Beginnings. This item gives your units a special buff that will help you along the way.

Find Out What The Chalice of Beginnings Does Here!

Cindered Shadows, the DLC content for Fire Emblem: Three Houses has launched on February 12, 2020. Update your game to dive right in.

This DLC is part of the paid updates included in the game's Expansion Pass. It is the 4th Wave and can only be played if you've purchased the pass.