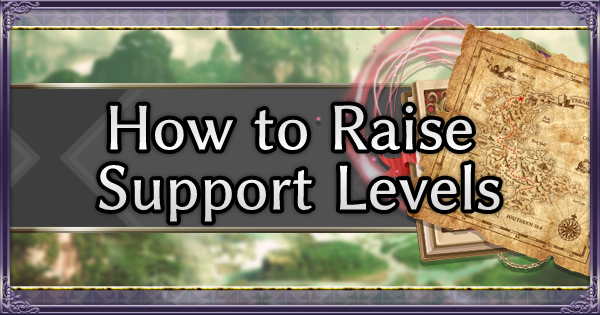 Check out this guide on How to Raise Support Levels in Fire Emblem: Three Houses. Know which facilities to use and which methods are effective in raising a character's support with this guide!!!

How to Raise Support Level

As the story progresses further, characters can be spoken to during certain events. Talking to them and choosing the right answer can raise their support.

Hurrying through cutscenes and skipping them also skips the conversation portion, preventing the player to choose an answer and raise Support. Take note of this especially on your next playthroughs.

Position Them For Linked Attacks

Support is increased whenever characters do a linked attack. Farming support can be done even when defending so try to place characters along side each other during battle.

During exploration, accessing facilities and inviting students to participate is another way of increasing support. While these activities usually consume an activity point, they also provide additional benefits like increased motivation or stats.

Click Here To Know More About The Monastery And Its Facilities!

Group Tasks grant both stat experience and support for the two characters assigned to them. Make sure to use this weekly event effectively by pairing characters that you want to increase support levels with.

Click Here To Know More About Group Tasks And Its Effects!

Pairs in Group Tasks have to be regularly changed as they are not automatically unassigned every week. While it does raise the experience and support of the assigned characters, it might also cause inbalance in the distribution of support among your team.

In story events and conversations, there are times that the game requires the player to choose a reply. Although the player cannot choose a specific character, choosing the correct answer often rewards the player with points to raise support level.

During the teaching part of the game, if you want to concentrate on increasing the support of one character, consider not using Auto-Instruct and manually instruct characters instead. Instructing them has a chance of getting either a "Great" or a chance to either "Console" or "Praise" them, increasing their motivation and support.

Click Here To Know How To Increase Motivation For More Support!

Support Level Is Trust Between Characters

Support Levels can be seen as how characters in the game trust each other. The higher it is, the better benefits it gives in battle.

Characters Cannot Raise Support With Everybody

Characters in the game cannot raise Support with every character in the game, and is especially true if you recruited someone from a different House.

Get To Know More About Linked Attacks & The Battle System Here!

Support conversations are cutscenes that show two characters' interaction with each other. Each cutscene is unlocked upon reaching a support level.

Conversations are also limited by the game's story. In order to progress and view them, the player has to also advance the game's main story.