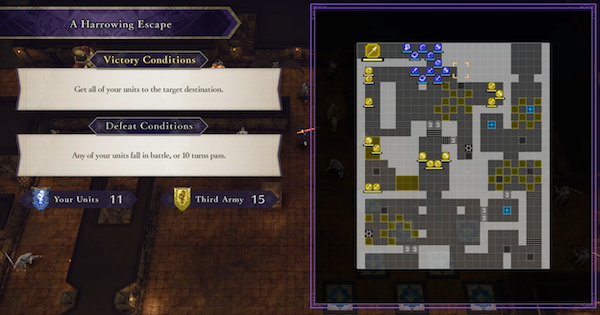 "A Harrowing Escape" Strategy And Tips

Get Everyone Past The First Checkpoint Quickly

When you start the map, you will be pursued by enemies from behind. Ignore them and move forward! You only have 10 turns to do this, but if all of your units pass the first Checkpoint, your turns will reset to 10, giving you more time.

There are two levers on this map that will open gates which make your escape faster. Send a mounted unit to get these!

Use A Key To Open The Door

After pulling the second lever and opening the 2nd gate, you will need to use a key to open the last remaining door. You should have picked up a key in the previous stages, so don't forget to give it to a mounted unit before the battle starts!

Ignore Golems and Some Reinforcements

Since you're on a 10-turn timer here, only take out the reinforcements if you're feeling confident on time. Golems, of course, should be ignored 100% of the time. Bandits will spawn toward the bottom of the screen. They will give you items you can sell for gold, so if you're fine on money skip them and push on to the end.

Reinforcements Come From The Front As Well

Reinforcements will flood in from all directions, including in front of you. Be careful of this and don't send a fast unit ahead entirely by itself, as it might get overwhelmed.

Get All Characters On The End Panels

Once you've gotten all characters onto the panels at the end of the map, you will achieve victory.

I don’t have a key in my inventory nor do any of my units have one on them. How am I supposed to obtain a key otherwise?