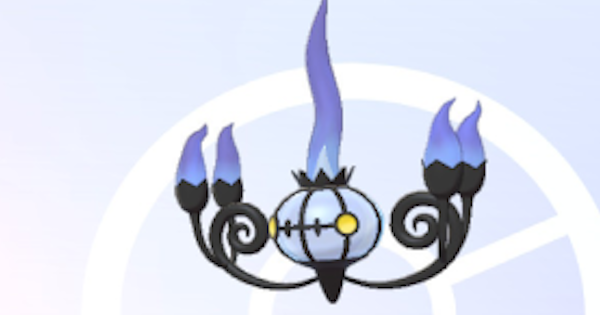 Find out how to breed Chandelure in Pokemon Sword and Shield! Learn about the best competitive Chandelure movesets, best builds, best nature, counters and the breeding process!!!

Chandelure is a very straightforward Pokemon - with an incredible 145 Special Attack and mediocre defenses, it is a glass cannon par excellence. Put a Choice Scarf on it to supplement its rather low speed, and given a Timid nature, outspeed a non-Scarfed Dragapult!

In addition to its superb STAB Fire and Ghost moves, Chandelure has access to a great variety of coverage moves. You should be able to outspeed and land a super-effective hit on a wide range of Pokemon. Running Trick or Will-o-Wisp will also allow you to mess with your opponent's Pokemon and ruin their plans. However, if you run Will-o-Wisp, you'll need to swap out or Dynamax!

Chandelure's Sp.Atk is indeed amazing, but due to usually not running a damage boosting item, it may have trouble taking out a Dynamaxed opponent! And, due to its low defenses, it can be taken out quite easily in the ensuing counterattack. Your best bet is to send it out after your opponent has already used up their Dynamax.

This build uses Chandelure as a lead to set up Trick Room. This build is somewhat less common than the attacker version, meaning it won't be predicted as easily! You'll be able to make up for your low defenses by using your item and your opponent's preconceptions against them!

Chandelure's main strength is its wide move range, as well as its high damage. By using Curse and Memento you're also able to deal a massive blow to your opponent after setting up your Trick Room.

Trick Room builds could use some more HP to ensure they survive to get it off.

How To Play Against Chandelure

It Has Limited Attack Boosting Options

Although Chandelure has a terrifying 145 Sp.Atk, it's rarely seen running stat boosting moves or items! This makes its offensive powers surprisingly middle of the road. Add to this its rather brittle defenses and you should be able to take it out as long as you don't eat a super-effective move!

Take It On With Dynamax

If you lack super-effective moves against Chandelure, consider Dynamaxing. This should allow you to withstand its attacks and take it out. When you see Chandelure in your opponent's party, consider your Dynamax timing very carefully!

Offensive variants of Chandelure often run a Choice Scarf, which means they'll likely be switching a lot. Laying out Stealth Rocks will severely limit its ability to do this!