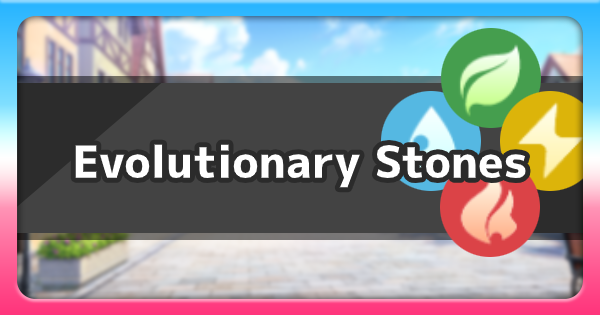 Pokemon Sword Shield
Evolution Stones - How To Get

Read Pokemon Sword and Shield guide on how to get/buy evolution stones and evolve Pokemon early! Including locations, respawn timing, and farming method of Evolution stones.

What Are Evolution Stones & Uses

Evolutionary stones are consumable items that cause certain Pokemon to evolve. They can be found all over the world in various locations. Many of them can be obtained relatively early in the game!

Can You Buy Evolution Stones?

Not Available At Any Shop

Evolution stones are not available at any shop, meaning you need to farm them throughout Galar region.

How to Get Evolution Stones

The Digging Duo, located in Bridge Field in the Wild Area, can dig up evolutionary stones for you. However, this seems to be random, so it's not a reliable method of getting stones.

Raspawn Daily At The Lake Of Outrage

Evolutionary stones can be picked up behind large stones in the Lake of Outrage in the Wild Area. Stones will respawn after a day of time in real life.

You will need to be able to ride your bike on water to access this, so you'll need at least 6 badges to come Locations!

Check Out How To Get Bike Locations!

Left Of Bridge After Leaving Motostoke

Go out from Motostoke & cross the bridge leading to the northern Wild Area. Then turn left - you'll see the item up against the walls, near some pipes.

Check Out Other Fire Stone Locations!

Can Be Found In The Lake Of Outrage

Fire Stone is also hidden in the Lake Of Outrage as well. Look for flashing item symbol to get one.

Near Nursery In Western Bridge Field

The Water Stone can be found near the western part of Bridge Field. It's somewhat difficult to find, so it's best to start at the Nursery and move directly along the wall until you come across it.

Check Out Other Water Stone Locations!

The Thunder Stone can be found in the North Lake Miloch part of the Wild Area. It can be found on top of a hill there. Pass through the Motostoke Riverside and climb up the hill. It is hidden in the grass, so look carefully.

Check Out Other Thunder Stone Locations!

The Ice Stone can be found near Circhester, on route 9. Enter the route and go forward into the water. It's near some floating ice. This one is not a Pokeball, so be careful! (You'll need the water bike).

Check Out Other Ice Stone Locations!

This stone is found on the western edge of Turffield, below a hill with an observation platform. You can get this stone quite early in the game!

Check Out Other Leaf Stone Locations!

Near Arched Rocks In Dusty Bowl

The Sun Stone is located in the Dusty Bowl, near an area with several arched rocks. If you go in the area between those rocks, you can find it!

Check Out Other Sun Stone Locations!

The Moon Stone can be found in the upper-right corner of the Dusty Bowl. It's against a large rock behind some bushes.

Check Out Other Moon Stone Locations!

Top Of Ledge In Route 8

The Shiny Stone is located on top of a ledge, behind the wall just when you enter Route 8. Getting to it is a bit troublesome because there's a lot of grass and the path is narrow and filled with Wild Pokemon.

Check Out Other Shiny Stone Locations!

This item can be found near the Stow-on-Side Pokemon Center. Simply go behind the sign and you'll find the Stone Locations!

Check Out Other Dusk Stone Locations!

Near Berry Tree In Giant's Cap

The Dawn Stone can be found in the Giant's Cap part of the Wild Area near a berry tree.

Check Out Other Dawn Stone Locations!