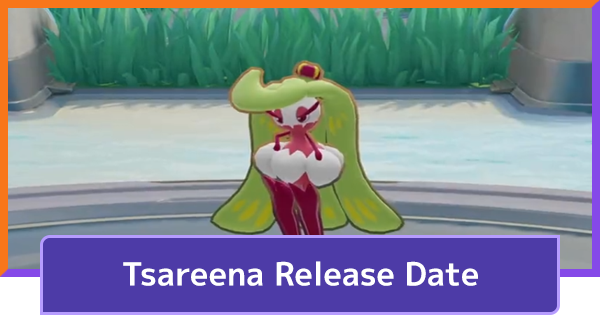 Tsareena release date is on December 9! Tsareena is a new character in Pokemon Unite (MOBA) for the Nintendo Switch, Android, & iOS! Learn the time & all info on Tsareena so far!

Tsareena Has Joined The Unite Roster!

Tsareena has kicked its way into the Battle Arena along with the beginning of the Holiday Festivity in Pokemon UNITE! Tsareena came right after the Server Maintenance at the above date and time.

Tsareena is almost ready to dance around the competition. Trainers that log in after the update on 12/9 can obtain its UNITE license for free for a limited time!

Don't miss out on adding this powerful All-Rounder to your roster! #PokemonUNITE pic.twitter.com/dIFVxyYkb7

Get Tsareena From Commemorative Event Rewards

Get a chance to obtain Tsareena's Unite License from the Commemorative Event Rewards for free by logging in to the game after the December 9 Update.

Tsareena Is An All-Rounder

Tsareena has been announced to be an All-Rounder! This means this Pokemon will have overall balanced stats, having a good amount of offense, endurance, mobility, scoring, and maybe even support!

With Tsareena's dashing moves, clearing spawns in the central lane should be no problem! Bounsweet can farm here during the early stages to unlock its deadly kick moves before getting in and out of battle in the other lanes.

This section is based off of the official trailer of Tsareena and what we know so far.

Tsareena's moves revolve around dealing damage to targets with consecutive kicks and dashing attacks! Our next-door Karate chic seems to be a more mobile version of Machamp - or so it seems.

On the video, we can see that Tsareena dashes in for an attack similar to moves like Zeraora. This could be ideal for moving around the map especially in the jungle area.

Tsareena jumps from the ground and smashes the area around it as it lands on its target. It can also be seen that it stuns its target for a short time, making it vulnerable to the next attack.

Tsareena twirls around to deliver its deadly kick move to its target! This move seems it can be used up to three times before it turns into basic attacks.

This move is somehow similar to Charizard's Seismic Slam. Tsareena dashes to its target and barrages them with kicks above the ground for a short time before slamming them on the ground. The animation was pretty cool and looks promising for our new all-arounder Pokemon!

This section has basic tips and tricks that you must know to effectively control Tsareena. Treat this as a supplement to the Beginner's Guide.

What Kind Of Pokemon Is Tsareena?

Also Known As The Fruit Pokemon

Tsareena's first appeared as a Grass-type 7th Gen Pokemon. Tsareena has the demeanor of a high-ranking aristocrat and has the color pattern of a dark pink berry with white highlights. Do not underestimate its long slender legs as they can deliver the deadliest kick!

Above is an overview of Tsareena's evolution based on its previous appearances and history.