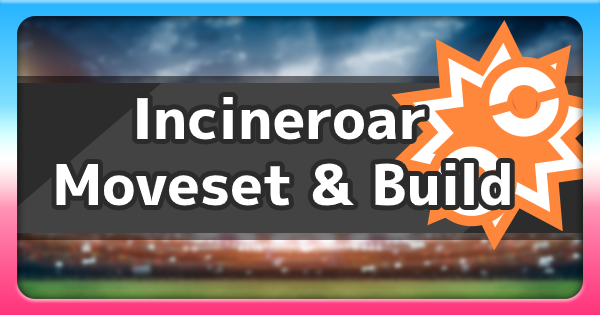 Check out this Incineroar guide in Pokemon Sword and Shield! Learn about the best competitive Incineroar movesets, best builds, best nature, Fake Out, and counters!!

Check Out All Competitive Builds Here!

The following is a part of our upcoming series of builds provided by Japanese Pro players! This guide is provided by Konoe!!

Aside from its rather low speed, Incineroar has excellent stats and is an overall great Pokemon. With 115 Attack and 90 in both defensive stats, Intimidate, and access to U-Turn, it is a very versatile Pokemon.

No Fear Of Being Burned

Incineroar's fire typing gives it a natural immunity to burns, which is one less thing for you to worry about!

Power Up With Swords Dance

Incineroar's Intimidate will give you more leeway to buff your attack with Swords Dance, which can supplement your offensive abilities. Additionally, it can act as a Max Barrier when Dynamaxed too, which often comes in handy.

A More Stable And Reliable Fighter

With Intimidate you can reduce physical damage, while the Assault Vest provides you with additional bulk for special damage, making this build a really reliable and safe alternative to other ones. Since Incineroar's speed is rather low, you can use a U-Turn without having your next Pokemon take a hit, which helps you effectively set up a counter to enemy Pokemon.

This build has two choices in terms of a dark move: Darkest Lariat or Throat Chop. Although Darkest Lariat is generally preferred, taking Throat Chop is a good way to deal with pesky Sylveons, as it will prevent the use of sound-based moves! If you're specializing in taking down Sylveons, however, make sure to adjust your speed EVs accordingly.

Primarina Is The Perfect Counter

Primarina was added to Sword and Shield at the same time as Incineroar, and also just happens to be a great counter! It has high Sp. Attack and isn't affected by intimidate, plus it can deal super-effective water damage.

Water-type Pokemon with strong defensive stats can win out against Incineroar by inflicting damage onto Incineroar and cycling out as needed.

Force Swaps With Stealth Rocks Up

Since battles with constant switching are so common, having Stealth Rock up will give you a huge advantage over Incineroar. If the Stealth Rock user is tanky, this can make your matchup even easier, so Hippowdon comes highly recommended here.

All of the information in this article, including EV distribution, counters, and moves, has been provided to us by the Japanese Pro Player Konoe.