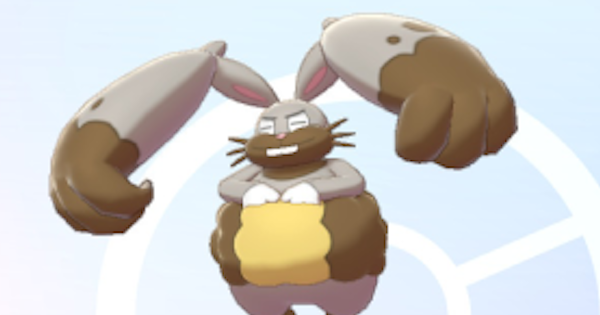 Find out how to breed Diggersby in Pokemon Sword and Shield! Learn about the best competitive Diggersby movesets, best builds, best nature, counters & the breeding process!

Diggersby's Hidden Ability Huge Power doubles its Attack, bringing it up to 112. When Dynamaxing and using Max Airstream, you'll also get a massive speed buff to boot. With one Max Airstream speed boost, you'll be able to outspeed a non-scarfed Dragapult!

One other advantage to Diggersby is that it has access to a wide variety of moves. If you're going to use it primarily as a Dynamaxer, you'll also have high power moves at your disposal. Top this off with an Assault Vest and it can also hold its own against special attackers too!

No Need To Rely On Dynamaxing

This particular build employs a Choice Scarf, allowing Diggersby to get moves off fast without requiring it to Dynamax. This leaves you the option of allowing a different Pokemon on your team to Dynamax, whille also doing excellent damage with Diggersby. However, be careful, as many of its moves tend to have low accuracy (except for Earthquake, that is).

How To Play Against Diggersby

Counters Differ Depending On If It Dynamaxes Or Not

How you go about dealing with Diggersby changes if you're facing a Dynamax user or not. Try to set up a situation where you force the opponent to use Dynamax quickly and create an advantageous situation for yourself.

Diggersby has a wide pool of available moves, but most of them are not STAB. As such, many defensively built Pokemon should be able to take hits from a non-Dynamaxed Diggersby without much trouble. One thing to watch out for is the possibility of Diggersby running Swords Dance, but this doesn't seem to be very common at the moment.

Use Super-Effective Moves On Dynamax Builds

It is not recommend to attempt to endure attacks from a Dynamaxed Diggersby. As such, it's better to Dynamax a Pokemon faster than it and aim for a 2HKO. Alternatively, if you can land a super-effective move, some Pokemon can even one shot it through its Dynamax HP boost.

Regardless of the build, we recommend offensive investments for Diggersby, as they pair well with its power-boosting ability.