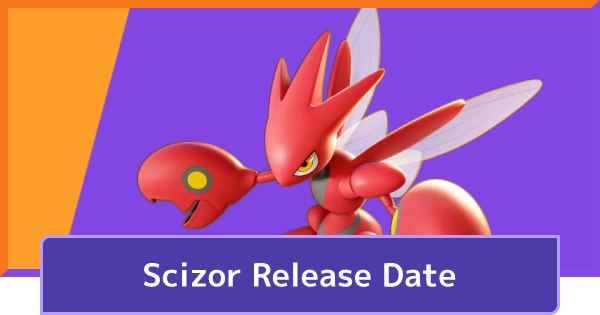 Scizor is set to join the fray this September 28, 2022, as announced at the 1st Anniversary Event. The new Pokemon will be released as part of the second phase of Pokemon UNITE's first-anniversary celebration!

Given that Scizor will be released on September 28 in North America and September 29 in Japan, the new Pokemon will most likely be released at 5:00 PM PDT / 12:00 AM UTC.

Scizor's Unite License price is not yet revealed so stay tuned for upcoming news regarding this.

Possible To Be Another All-Rounder

Scizor seems to have a good combination of offense and endurance, with some mobility added on top of it based on the trailer. Similarly, All-Rounders have the same characteristics which make them reliable fighters in team battles. If this is so, Scyther would be the game's second Bug-type/ All-rounder Combination after Buzzwole.

Bullet Punch will ensure that Scyther evolves into Scizor! This move has the user dash in a designated direction and strikes its opponents with tough punches. If the user hits an opponent, the move’s cooldown is reduced, and it recovers HP based on the damage dealt!

Scyther, Scizor's first evolution, is shown to dash through its opponent in a rush assault. It also shows two Scyther forms, in which one dashes towards the other, inflicting damage on anyone caught in the line. It seems to offer a lot of mobility which can be used in getting in and out of team fights.

It seems that Scizor excels in close combat situations so it needs to get near its target to land its bullet punches. This may synergize with its rush attack move that it may use to close the gap quickly or with Held Items like Eject Button.

2 Unite Moves To Choose From!

Included in the announcement trailer is a featured comparison of its 2 Unite Move gameplay side by side. Scyther can perform Green Illusion Dive, whereas Scizor can do Red Illusion Dive. Attack the opponent, generate illusory replicas with particular qualities, and then deal massive damage. Scizor's gameplay is likely to concentrate on the evolution system, with varied moves and playstyles depending on the evolution you choose!

This looks like Green Illusion Dive is a promising move that you can use as a decoy. It may also have additional debuffing effects or damage to anyone that gets in contact with them.

What Kind Of Pokemon Is Scizor?

Introduced As A Bug/Steel Pokemon In Generation II

A single swing of one of Scizor's pincers, which contain steel, can crush any hard object it gets ahold of into bits. Scizor has a body with the hardness of steel. It is not easily fazed by ordinary sorts of attacks and flaps its wings to regulate its body temperature.