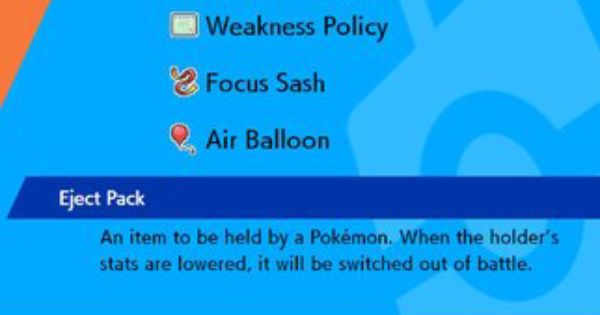 Pokemon Sword Shield
Eject Pack - How to Get & Location

Read about how to get the Eject Pack held item in Pokemon Sword and Shield. Including where to get Eject Pack, location, price and its uses & effects.

How to Get Eject Pack

Can Be Bought in the BP Shop

The Eject Pack can be bought in the BP shop for 20 BP. You can buy as much as you want so long as you have the BP for it.

Switches Out Pokemon When Stats are Lowered

Pokemon holding an Eject Pack will be switched out during battle when their stats are lowered. This is instant, not requiring the end of the turn.

This item is useful vs. Pokemon which can lower your stats on entry such as Gyarados and Arcanine.

Trick Eject Pack On Your Opponent

By using a Pokemon that knows the move Trick, you can give this item to your opponent. The next turn, use a move to lower their stats and eject them out. This can be used to waste your opponent's Dynamax!