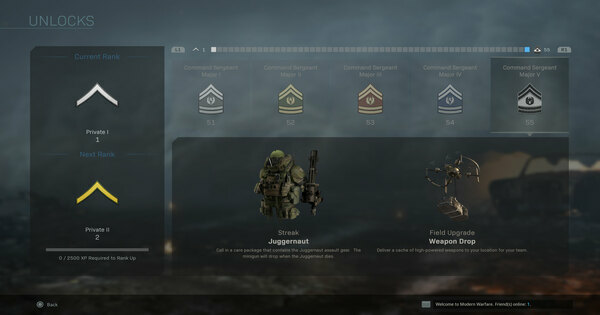 Ranking up will unlock rewards in the form of weapons, equipments, loadouts, and more! Check out the list below to find out the unlockable rewards for each rank up!

Game progression in CoD: Modern Warfare Multiplayer is determined mostly by player Rank. Rank determines the amount of in-game contents that are unlocked such as weapons, killstreaks, access to seasonal events and more. Rank is increased by gaining EXP.

Enlisted Rank unlocks most of the in-game base items and acts as a semi-tutorial phase of the game. Officer Ranks has players competing for seasonal prizes in an end-game challenge.

Check out How To Level Up Rank Fast!

Weapons have a different progression system called Weapon Levels that are tied to individual weapons, its level based on how many kills the player makes with that weapon. It will unlock attachments & camo to use exclusively for that weapon at the gunsmith.

Check Out How To Level Up Weapon Levels Fast!

Enlisted Ranks is the beginning Rank tier that all players must max out to get the most of in-game assets. Raising Enlisted Ranks will unlock most of the gear that you will need to start making your custom loadouts.

Check Out All Rank Progression Unlockables!

Restricted To Default Loadout At Start

At Rank 1, you will be restricted to 3 predetermine default loadouts and a few Killstreaks & Field Upgrades. You get more default loadouts for the first 2 levels, so start getting a hang of equipment by using them.

Custom Loadout is the system which players can choose which weapons, perks, equipments they want to bring into battle, which unlocks at Rank 4. Knowing how to min-max your custom loadout will greatly effect your performance.

The maximum rank for Enlisted Rank tier is Command Sergeant Major V (55). By then, you've unlock most of the base items you'll need to proceed. Enlisted Ranks will not reset.

Check out How To Level Up Rank Fast!

For those familiar with the franchise, there will be no Prestige system to be introduced in Modern Warfare as of this time. Instead, it is replaced by Officer Ranks.

Officer ranks will reset at the start of each season to give a clean slate for all players, restarting everyone in the Officer Ranks back to Rank 56. Enlisted Ranks however, will not reset. If you have not reached Officer Rank before the next season starts, you will need to complete all Enlisted Ranks first before unlocking Officer Rank.

Gain Exp to rank up on officer ranks. Each time you level up, a Officer Challenge will unlock. Similar to Daily Challenges, these objectives will reward XP but also give the player a special Seasonal Ribbon.

Evolve Your Ribbons To Emblems

Earning 10 ribbons rewards a Season Emblem, which will evolve each time with 10 additional ribbons earned. Collecting all 100 Ribbons (1 per Officer Rank) unlocks an Animated Emblem as proof of your performance.

You'll receive another cosmetic Weapon Blueprint when you reach the end of Officer Rank. Use it to showoff your achievement to other players!

While Officer ranks will reset between seasons, your highest Officer Rank attained, Officer Challenge Ribbon & Emblem for each seasons will be permanently recorded into your Player level and will not be lost.