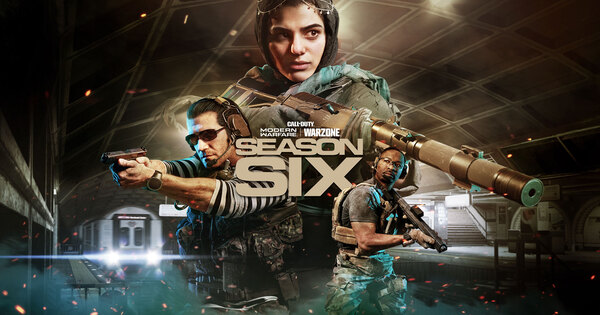 Season 2 brings with it a new 100-tier Battle Pass complete with unique rewards that players can grind for while playing. Same with Season 1, players can still get rewards for free but getting a Battle Pass for 1000 COD Points opens the whole reward tiers.

This modular 5.56 weapon platform is lightweight and maneuverable, with exceptional range. Precision engineering and world class after-market barrels give this weapon extreme potential.

A hard hitting submachine gun chambered in .45 Auto that will shred at longer distances than other weapons in its class. Moderate rate of fire keeps the gun in control while fully automatic.

Check Out The Striker 45 Here!

The ability to wield two guns, Akimbo, is back as a Perk for Handguns. Unlike normal weapon attachments, players must complete specific conditions for each weapon to unlock this weapon perk.

Check Out The Akimbo Perk Here!

How To Unlock Season 1 Weapons

Is There A Battle Royale Mode?

Teased In The New Intro Video

The intro video for Season 2 contains elements that are commonly found in Battle Royale games. The appearance of a mysterious "Classified" option in the main menu further cements the possibility that a Battle Royale mode will be implemented in the near future.

Check Out Is There A Battle Royale Mode? Here!

Like Season 1, some of the new content for COD:MW in Season 2 will be implemented during the season itself. New maps, weapons, and a new operator will be available once Season 2 starts. New game modes, maps, another weapon, and 2 new operatives are set to be added later in the season.

Weekly challenge has been added to the Missions & Challenge tab in the Barracks. A total of 10 Challenge per week will provide additional XP if you complete them.

The official trailer for the Season 2 of Call of Duty: Modern Warfare is now out. Players can now check the video and see the new additions and content that are slated to be added once Season 2 starts on February 11.

With Season 1 set to end on February 11 (Tuesday), Season 2 will immediately begin together with a slew of new content. This also means that a new Battle Pass with Tier rewards, and several new features and operators will be introduced.

Season 1 has just released and is now available as a free update for the PS4, Xbox One, and PC. Included in the update are new features, new maps, and modes for all players to enjoy.

The list above displays the upcoming maps for Season 1. These maps span along different multiplayer modes, including Gunfight and Ground War!

Old favorites Vacant and Shipment will be included in the multiplayer map rotation at a latter date this Season 1.

Reinforced is a new game mode that is immediately available on launch day. Here, players get only a single life and must use it to capture all three flags to win. Getting a flag will revive the whole team, adding flavor to this already intense game mode!

OSP puts a twist on regular gunfight matches. Instead of starting with a random loadout, you start with your fists, and pick up random weapons scattered around the map! This update will arrive later in Season 1.

Infected is a classic cat-and-mouse survival party game where players are split into two teams: survivors and infected! This game mode is expected to arrive as an update later in Season 1.

Get in the Holiday Spirit with this time-limited seasonal mode, the Snowfight! Available through December 24th to 27th, this mode give all players a snowball to pitch at your rivals for a quick and fun match.

New Spec Ops operations have been added that will revolve around Barkov and his forces!

The RAM-7 is a new bullpup Assault Rifle that has integrated picatinny rails mounted around the gun which allows for multiple attachments to the weapon.

Check Out The RAM-7's Stats Here!

The Holger-26 is a variation of the Holger LMG with an integrated sight rail. It also features a drum magazine for additional ammo carrying capacity to keep you in the fight for longer!

Check Out The Holger-26's Stats Here!

Earned Through The Battle Pass

These new base weapons are earned through the game's new battle pass. These weapons are free contents, which means that players will be able to earn and unlock them for free!

Season 1 also brings with it a 100-Tier Battle Pass that rewards players with new items and cosmetics. The rewards contained in the Battle Pass are expected to be exclusive only for this season. Players can get a Battle Pass for 1000 COD Points.

Some tiers in the Battle Pass can be accessed for free. These include the two new weapons, several blueprints, and some stickers and calling cards.

Players wanting to jump into the world of Call of Duty: Modern Warfare can opt to purchase the new Battle Pass Edition instead. This edition comes with 3000 COD Points, more than enough to buy a Battle Pass, and some skins to help you start up your game!

Check Out The Different Editions You Can Buy Here!

The in-game store for Call of Duty: Modern Warfare is now open and is offering players several bundles to decorate and dress up their operatives. These bundles also include Operator Quips, Weapon Blueprints, and new Finishing Moves.

To be able to buy anything from the in-game store, you must first purchase COD points to use as currency. They can only be acquired by purchasing them with real money from the store or as rewards from several tiers in the Battle Pass.