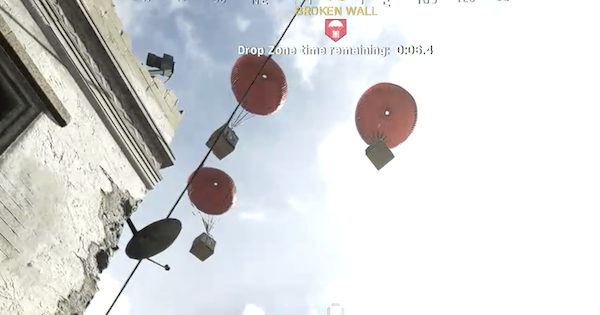 Dropzone plays similarly to Hardpoint with each team battling each other for control of randomly placed capture points. The twist is that Care Packages containing Killstreaks are dropped while a team is controlling an area.

Killstreaks Are Taken Not Earned

Equipped Killstreaks have no effect in this game mode. Killstreaks can only be gained by taking the Care Packages dropped when a capture point is being occupied.

To Get The Care Package Or Not

While Killstreaks can turn the tide of the battle, they are random, can make you vulnerable to enemy fire, and can also be captured by enemy players.

How to Win a Round

The more members there are in a capture point, the more points are earned. Capture points are not permanent and are relocated after some time. The team that ends up with the most number of points or reaches the score limit wins the match.

LMGs, while heavy and bulky, provide the user with a large capacity magazine and enough firepower to safeguard a path or entry point. This allows it to easily secure points while keeping enemies at bay, a must-have trait in Dropzone.

Assault Rifles For Most Situations

Be it mid or long range, ARs are very useful tools in eliminating threats. Use them to pick off enemy players at a distance. You can also use attachments that would make them more effective in close range encounters.

Check Out All Assault Rifles Here!

Molotovs and Thermites are Lethals that provide damage over time on a given area. Use them to either flush out enemy players capturing a position or to block chokepoints.

Gain An Advantage With Tacticals

Use Gas Grenades Or Smoke

Gas Grenades are pretty useful when assaulting a position. They have a decent area of effect, disabling and confusing enemy players caught in its smoke cloud. You can also opt to use Smoke Grenades to cover you or your teammates when capturing Killstreaks.

As enemies are more likely to concentrate guarding a capture point, you can lob a Snapshot Grenade to get intel on where they are exactly located. Use this before you and your team assaults a position for greater effect.

Using E.O.D. Perk is a great way to survive against enemies that use explosives before assaulting the capture point. This perk is extremely valuable when defending against enemy attacks.

Tune Up When Hunkering Down

Equip the Tune Up Perk to quicken your Field Upgrade's cooldown by 33%. Use this perk in tandem with Field Upgrades such as Deployable Cover, Tactical Insertion, and Trophy System.

Check Out All Field Upgrades Here!

Use Care Packages As Cover

Getting the Care Packages can make you visible and vulnerable to enemy fire. Plan your angle of attack and use them as cover when capturing them.

Killstreaks Can Be Stored

You can collect Killstreaks and store them for use later. As Killstreaks occupy only one slot in this game mode, the most recent Killstreak will be used first.

Check Out All Killstreaks Here!