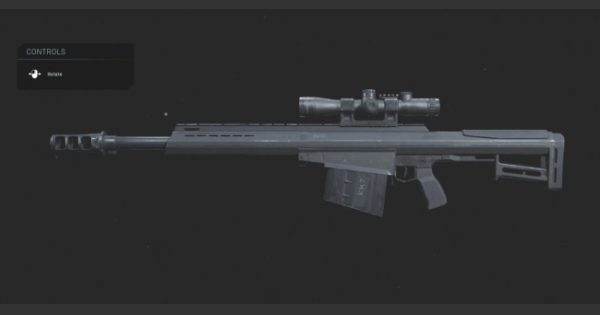 Rytec AMR - Stats & How To Unlock

Check Out All Sniper Rifles Here

Rytec AMR has great long-range damage capability but due to its slower muzzle velocity when using explosive rounds, it is best to remain stealthy to stay alive longer. We chose Ghost & Cold Blooded to counteract thermal & digital surveillance prevalent in Warzone.

Deal Burst Damage With Renetti Or .357

For close-range self defense, Akimbo Renetti & Snakeshot .357 can work even with the armor mechanics due to the burst damage it can deal. Just be sure to get close to deal out max damage with them.

Swap Out Secondary For Any Weapons

With Amped, you can swap between any weapons much quicker. This also means that you can ditch your secondary for any weapon you find in the field, giving you more tactical flexibility.

This setup shoots explosive sniper shots and supplementing the package it with stealth and much needed ADS Speed boost. It improves handling for long-range sniping & anti-vehicle role.

Rytec AMR has a slower ADS speed to most sniper rifles, which isn't a problem at mid to long range but try to keep it out of in your face moments. Switch to a close-quarter oriented weapons before getting close.

Mount The Weapon If You Can

Rytec AMR has a hard recoil per shot, so its best to mount the weapon before firing to counteract this. Do not spam shoot this weapon or the rounds will go all over the place due to the recoil.

This build focuses on your mobility allowing you to quickly move around small maps and tight spaces. As marksman & sniper rifle often weights a ton and is slower to move around, we chose the Double time so you can sprint around faster to reposition fast.

You'll need all the intel you can get to successfully blast enemies in the complicated maps of Multiplayer. That's where Hardline comes in: With only 2 kills, you'll get a Personal radar to scout the map for you & the whole team!

Track & Hide The Skulls Of Targets

Tracker perk lets you see footprints of enemies, giving you some idea of which corner they've went to. It also conceals the skull markers of targets letting you get jumped less by enemies alerted of their buddy's demise.

This setup make use of Rytec AMR's 1 shot capability by complementing it with fast ADS speed. As sniper rifles has a slow ADS speed, this will somewhat makes handling better for you to harness Rytec AMR's explosive 1-shot-kill potential.

Out Now With Season 4 Reloaded

The Rytec AMR is now out together with the Season 4 Reloaded update. It's a new anti-materiel Sniper Rifle that can be unlocked by completing a new Mission Challenge.

Modeled After The Barrett XM109

The Rytec AMR seems to be modeled after the real-life anti-materiel rifle, the Barrett XM109. The gun is chambered with armor-piercing rounds, capable of blasting through light armor. It can chamber up to 5 rounds and can pick off targets from afar.

Though the Rytec AMR appears to be an anti-matter sniper rifle, it can fire explosive rounds instead of normal bullets, based on its real life counterpart. These deal heavy damage to infantry & vehicles alike. Explosive rounds attachments must be equipped to use.

Impossible to do in Warzone...