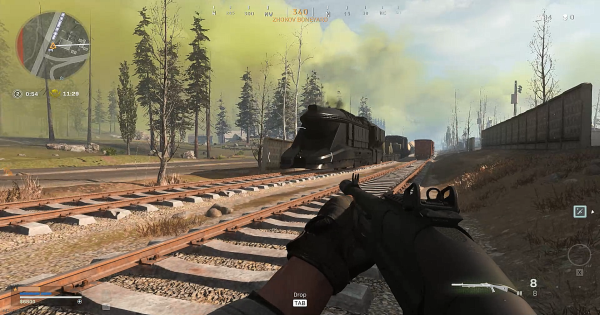 Read this Call of Duty MW / Warzone guide to learn more about the loot train added to Verdansk in Season 5! Find out the train route, how to find it, train tracks, & location!!!

Check Out The Season 5 Roadmap Here!

How To Get To The Train

Land Directly On It

One surefire way of getting to the train and obtaining the precious loot it holds is to immediately head for its location once you jump off the plane. This will maximize your chances of reaching the train while the loot is still untouched!

Enemies May Be Landing With You

Keep in mind that other enemies might have the same idea and try to land on the train as soon as possible. Be ready for intense gunfights as soon as you land!

Hop On As It Passes By

You can also get on the train by hopping on to it when it passes you by. However, keep in mind that the train might already be looted when you encounter it in the later stages of the game.

Find The Train Via Your Map

You can find the train by opening your map and zooming in to the mid to lower left section. There will be a centipede-like icon moving around slowly. This icon will denote the train's location in Verdansk.

What Is The Loot Train?

The train is a new moving locale that contains tons of loot (including red lootboxes) for you and your team to get! It is constantly moving around the map so it is not always in the same place.

Aside from loot, the train will also give you the option to resupply your ammo and equipment. This will be useful especially when you are running low on supplies when in the later stages of the game.

The train cannot be stopped. Placing vehicles in front of it will not impede its movement. Be careful as standing in front of the train will instantly kill you.

The train follows a designated route around Verdansk. It does not change its route, and will be traveling through this path until the match ends.

NOTE: This route is based on the initial observation of the train's route. This map will be updated as soon as more information is confirmed.

The train was first introduced in Call Of Duty Modern Warfare / Warzone's fifth season. It makes its debut along with other new features such as the opening of the Stadium, the Train Station interior, new weapons, new battle pass, and more!