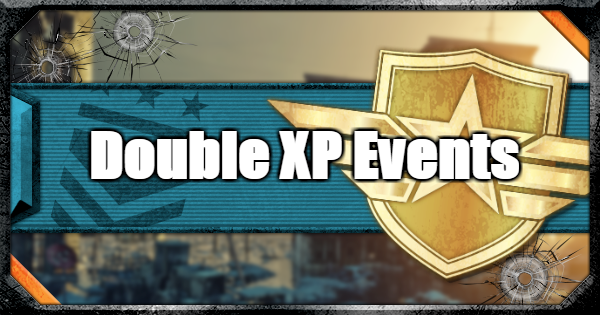 Players who play Call Of Duty this weekend will earn double the amount of XP, weapons XP, and earn double XP for their battle pass. Use this opportunity to get a head start on the season 6 battle pass while also leveling up your weapons!

Although not as big as a 2XP bonus, simply getting a Battle Pass provides you with 10% XP increase for the duration of this Season. Buy the Battle Pass during the early days of the release to make the most out of this bonus.

Playing Gets You Back Your Initial CP

If you're worried about investing your cash into a Battle Pass, worry not as you can get it back if you level up your tiers. The Battle Pass has a total of 1300 COD Points (CP) as rewards, giving you more than the 1000 CP it costs to get one.

What Are Double (2XP) XP Events?

Double the XP Gain for a Limited Time

Double XP or 2XP Events are limited time events that allow you to earn double the amount of weapon and rank XP. At times, this even doubles XP earned from other sources. These events usually happen on weekends.

May Be Restricted To Certain Game Modes

Remember that Double XP Events may be limited to certain game modes. The rewards provided may not be available in other game modes.

Check out How To Level Up Rank Fast Here!

Players who play Call Of Duty & warzone this weekend will be able to earn double the amount of XP, weapons XP, and earn double XP for their battle pass. Use this opportunity to jump-start the season 5 battle pass while also leveling up your weapons!

Players who play Call Of Duty this weekend will be able to earn double the amount of XP, weapons XP, and earn double XP for their battle pass. Use this opportunity to complete the season 4 battle pass while also leveling up your weapons!

Starting from July 17, you get 2XP, & 2XP weapon XP, but sadly no 2x Battle Pass tiers for an entire weekend! Get in the fight immediately at Modern Warfare & Warzone to maximize your progress for new meta weapons like FAL!

In the Season 4 Reloaded roadmap, it's been hinted that there will be an XP event called Triple Feed (3XP) coming soon. Chances are it will be a Triple XP for all items, but check back often for more 3XP news!

2XP Everything From July 3

Starting from July 3, you get 2XP, 2XP weapon XP, and 2x Battle Pass tiers for an entire week! Get in the fight immediately and start the Modern Warfare & Warzone! This is also the time to grind attachments for new weapons as weapon balance changed in Version 1.23.

2XP Everything From May 29!

Starting from May 29, you get 2XP, 2XP weapon XP, and 2x Battle Pass tiers for an entire weekend! As Season 3 comes to an end, get in the fight immediately at Modern Warfare & Warzone!

No 2XP Events For this Week

There are currently no active 2XP Events for this weekend (May 22~25) announced. Check back often for latest events!

2XP Everything From Now!

Starting now, you get 2XP, 2XP weapon XP, and 2x Battle Pass tiers until May 8 (Friday)! Get in the fight immediately and start the Modern Warfare & Warzone!

2XP Everything From May 1

Starting from May 1, you get 2XP, 2XP weapon XP, and 2x Battle Pass tiers for an entire weekend! Get in the fight immediately and start the Modern Warfare & Warzone!

2XP Everything From April 17

Starting from April 17, you get 2XP, 2XP weapon XP, and 2x Battle Pass tiers for an entire weekend! Get in the fight immediately and start the Modern Warfare & Warzone!

2XP Everything Extended Until April 7

Over the weekend we experienced a few XP and progression issues. To thank you for your patience while we got everything back up and running, we'll be leaving the 2XP, 2XP Weapon and 2XP Tiers event on until Tuesday, April 7th at 11PM PST.

2XP Everything From April 3

Starting from April 3, you get 2XP, 2XP weapon XP, and 2x Battle Pass tiers for an entire week! Get in the fight immediately and start the Modern Warfare & Warzone!

Watch Twitch streams on Veterans Day from a list of steamers for 1 ~ 2 hours to get a 2XP token (30 Min) and a calling card! Only available on November 11, and must connect Call of Duty account to your Twitch Account.

Sign up using your e-mail to get updates for the Call of Duty League! You will also get a 30-minute 2XP Token! Keep in mind that you can opt out of the newsletter at any time!

Instructions on how to get the Double XP token will be sent to your email. It may take awhile for the mail to arrive.

Grab your squad and level up during our 2XP flash event, going live today from 12PM PST-5PM PST only on Sunday, October 27th! #ModernWarfare

A flash 2XP event will take place from 12PM ~ 5PM PST only on October 27th (Sunday). It will have both 2XP and 2X Weapon XP, so hurry and start battling!

2XP Everything For The Whole Week!

Starting from March 10, you get 2XP, 2XP weapon XP, and 2x Battle Pass tiers for an entire week! Get in the fight immediately and start the Warzone!

Watch eligible channels and get a 1 Hour Double Weapon XP token! Players are required to have a Twitch account linked to their Call of Duty account to avail of this event. Use this to quickly level up your favorite weapon and unlock better attachments!

Earn double the experience in multiplayer throughout several months as PepsiCo & CoD: MW team up to provide in-game rewards such as 2XP double experience (x2 exp) and in-game cosmetic items!

What Are XP Tokens?

2XP Tokens are a new 2XP system introduced in CoD MW. By acquiring & activating a 2XP Token, players will be able to get double experience in multiplayer for a limited duration.

The new 2XP Token system gives players more flexibility in their gameplay by letting players decide when they want a boost. For example, a casual player can save up on tokens and only use them on weekend long-hour playthroughs.

How To Get 2XP Tokens

Get Them Through Gameplay

Players can earn 2XP Tokens by simply playing the game. Completing objectives and challenges will reward you with tokens which you can use later on.

Check out All Challenges Guide here!

Completing campaign missions will grant rewards that include XP tokens! Finish the campaign for rewards you can use in multiplayer!

Purchasing special 3rd-party products from retailers and partners may reward special codes you can redeem to receive XP tokens. Come back to this page often for the newest events!

Via the Companion App

You can also earn Double XP tokens as rewards by logging into the Call of Duty App. Keep in mind that these rewards are given weekly, so logging in once a week will allow you to easily get the most out of the app!

Check Out the Companion App Here!

Keep in mind that you will not always get double XP Tokens for logging in into the app. You may sometimes get other rewards.

What Do 2XP Tokens Do?

When the tokens are active, players receive double the XP for multiplayer in-match accomplishments and achievements. The boosted XP is awarded immediately and is reflected in the total XP you earned listed in the After Action Report.

There are Weapon XP Tokens that increases the weapon XP gained instead. it can be earned through challenges and campaign missions.

Unlike previous systems, the Token Timer runs on real time instead of match time, meaning the timer runs even when you're not in a match, such as when editing loadouts or options. Only activate an XP Token that fits your play session time to get the full effect.

Timer Counts Even After Exiting The Game

The Token Timer runs even when you exit the game. Any left-over duration will be wasted if you close the game to go sleep, eat, etc.

See The Timer In Lobby

You can check the remainder of the Token timer at the right-hand side of the screen in the Multiplayer pregame lobby. It will appear when a token is activated.

Unlike previous titles, CoD MW will not have any limitations on how many 2XP tokens you can activate within a day, offering more freedom for players on how to spend their tokens.

You can activate multiple tokens at the same time for increased total duration. The effects, however, will not stack, so only do so when you're sure to play a long session.

In-Game Tokens Have No Time Cap

Partnership XP Tokens obtained through code redemption are capped at a total of 40 hours. In-game tokens however have no such caps and can be used for as long as the player has tokens.

How To Use 2XP Tokens

Activate Tokens In The Multiplayer Lobby

Tokens can be activated after joining a queue for a match in the Multiplayer lobby. Once you do that, a button to View Tokens will appear on the right side of your screen (3 is only for the PC version). You can then select the Token you wish to activate.

Does the 2XP weekend also double the amount of XP earned from officer challenges?