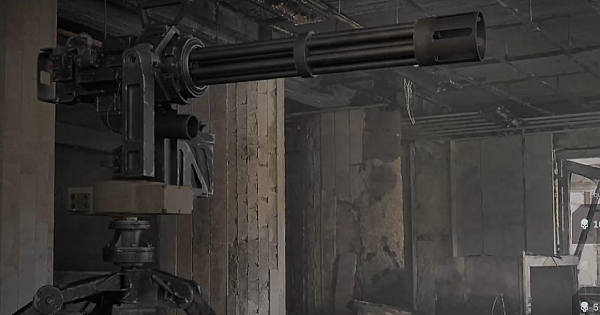 Read this guide to learn about the Sentry Gun Killstreak in Call of Duty: Modern Warfare 2019 & Warzone! Find out how and when to use the Killstreak, gameplay tips, and more!!!

This Killstreak deploys an automated turret that scans and shoots down enemies within its range and line of fire. However, it only focuses one enemy at a time.

Once the Sentry Gun is deployed, you are free to leave it alone because it automatically scans and shoots enemies. It's not the type of turret that needs to be manned.

Shoots Based on Line of Sight

With a bottomless magazine, the Sentry Gun will continue shooting down enemies so long as it is not destroyed. It will not reload so there is no pause in its fire rate.

Can Be Deployed in Most Areas

As long as its a flat surface with no obstructions, the Sentry Turret can be placed down with no issue. It cannot be placed on window panes, roof slants, and other uneven surfaces.

The Sentry Turret has a limited view and cannot go beyond a 180° angle turn. This makes it back its weak side since it cannot turn to defend itself.

One of the best places to put the Sentry Gun is at chokepoints and entry ways. Do not place it right in front of it, but rather at corners adjacent to the entrances.

Place in Corners, Back to the Wall

Keep your Sentry Turret's weakpoint safe by placing it in corners or with its back directly against the wall. This will prevent enemies from going behind it and destroying it.

Cold-Blooded Perk let the user be invisible to AI targeting system, thus they can walk over Sentry Gun with ease. Know Sentry Gun's limitations and drop a Proximity Mine near it as reassurance.