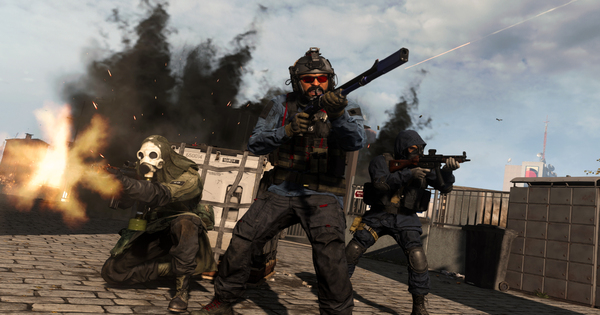 Can Be Assembled Early On

Core components for this loadout can be easily assembled early on even if you haven't maxed out your Enlisted Ranks. Jump right into the fray and stay competitive even if you have just started Warzone!

Your PKM has high magazine, good range and high rate of fire. PKM's extremely versatile, and the rest of the Perks will back it up with increased sprint time from Double Time(Since LMGs are slower), knowing when you're spotted, and a faster weapon swap time.

Can Handle Vehicles On your Own

An unexpected threat in Warzone are the vehicles running around and ramming people. As many players will be driving around, having a rocket in your loadout can mean a free kill or a deterrent from being rammed. Also useful for clearing out rooms.

If you don't like lugging around a LMG, try M4A1 or Kilo 141 instead. They are maneuverable early-rank weapons that can be modified to be effective at most ranges and situations, letting you be more aggressive and mobile.

Due to the new Body Armor mechanics and having to fight whole teams, having a larger magazine size is highly beneficial. M4A1 and Kilo 141 both comes with 50 or 60 round magazine attachments.

Track Down Supply Boxes For Killstreaks

As you will be on the move a lot, you can hunt down a lot of Supply Boxes scattered across the map. The Kill Chain perk lets you grab more killstreaks for use against hard targets to get ahead.

If you have a hard time controlling the big recoils of .357 & .50 GS, pick Renetti as your sidearm instead. It has very good handing and decent range for a handgun to be effective as a backup weapon. Renetti was introduced in season 3.

Pick Between Defense Or Stealth

Grau 5.56's soft recoil and its longer ranges allows it to handle most ranges with ease. You can fight with it in most situations making it a solid choice as a main weapon, thus Overkill isn't really necessary. Choose between defense or stealth for the loadout.

Swap out Weapon As You See Fit

With Amped, you can swap to any weapons fast, meaning you can actually use them when you need to without fumbling. As weapons are plentiful in Warzone, swap out your secondaries based on your situation, whether its a shotgun for room cleaning or a sniper rifle for the open areas.

Snipe & CQB At the Same Time

This loadout focus on the 2 things players will encounter in Warzone: Picking each other off in the open fields and the ruthless CQB battles in buildings. HDR packs the punch to one-shot people at range while R9-0 shotgun has the burst damage & magazine size needed to clear rooms.

Thermal optics gives a good advantage when looking for targets in the open fields, and many players will be using them. Counter this by having the Cold-Blooded perk which hides you from thermal detection.

Tracker Perk lets you see skull icon at a dead enemy's position, useful in determining if there's enemy teams near your locations. it also hides the skull icons of players you kill, keeping their teams in the dark about where they fell.

Thanks to both weapons, you will be able to reliably hit your shots at any range. The Striker 45 SMG can help you defend yourself at close range, while the Bruen Mk9 LMG covers you at longer ranges! Equip the Amped perk to allow you to switch weapons faster during surprise encounters!

Due to the large size of the Warzone map, it's recommended to increase your mobility at all costs! The Double Time perk lets you increase the duration of your Tactical Sprint, and your crouch movement speed, making you a harder target to hit!

No Need For Tracker Perk

The benefits provided by Tracker Perk overlaps with the effects of these unique attachments, so there's no need to pick Tracker. We chose Spotter instead as it let the user see & hack equipment through walls which will be good intel on enemy whereabouts.

Cold-Blooded & Ghost will keep you off all digital surveillance whether its the UAV, Heartbeat Sensor or Thermal optics. No one will be able to track you unless its by direct line of sight.

Swap Ghost With High Alert If No UAV

If you feel there's not a whole lot of UAV being used or isn't too concerned about them, swap Ghost for High Alert so you know when you've been seen by enemies.

A nasty trick will be to down an unsuspecting opponent, throw a C4 and then run away. When you can hear the enemy teams trying to revive, blow the C4. You'll find plenty of unsuspecting prey if you stealth your way along.

Support Your Teammates With the Versatile MK2

This support build focus on patching up any potential roles that your team may have missed due to specializing on certain loadout. The MK2 can deal with targets close and far flexibly, letting the user pursue other role tasks. Hang back a bit from your team to observe and support when needed.

SKS, introduced in Season 3, is a good alternative with its high rate of fire (RoF) & decent magazine size. It doesn't deal as much damage per shot as the MK2 but is just as deadly with its ease of follow up shots and manageable recoil.

Most loadout cannot deal efficiently against enemy vehicles, so It'll be up to you to pop that enemy vehicle or chopper. Also, spot enemy equipment like Claymore & C4 to prevent your team from walking into a trap.

Smoke Grenades if used smartly can turn the tides of an encounter. Popping one when retreating or reviving a teammate can greatly increase its success. As most players will focus on other tacticals like Flash or Stims, you need to pick up the slack one again.

Choose Pointman If Your team Focus on Contracts

Pointman increase your team's cash when completing contracts, making it advantageous in modes like Plunder. More cash also means more Self Revive purchases as well as teammate revives, so it might add up a lot if your team does Contracts.

Loadout Before You Get Loadout Drops

This loadout is for the starting phase of Battle royale when players has yet to make enough cash to call in Loadout Drops to get their custom loadouts. It comprises of weapons looted in the field.

Another list of weapons mainly Assault Rifles & Submachine Guns (SMG) has been added to the lootable weapons pool. These include but not limited to: AK-47, M13, Kilo 141, Ram-7 & Striker 45.

4 New Weapons Can Be Looted

725, MK2 Carbine, .50 GS, and EBR-14 are added with 3/24, 2020 patch update to the lootable guns in Warzone. Players can now find them scattered in supply boxes & in the field. They provide burst damage and mid-ranged battle options to the game,

Check out their Weapon's Ranking here!

As the cost for Loadout Drop is increased to 10,000 in patch 1.19, you'll be fighting longer with looted weapons. Familiarize yourself with these loot weapons before dropping in.

This loadout lets you deal with most situations at all ranges - burst damage when in tight CQB with 725 or MP7, and mid-range combat with Mk2 carbine or assault rifle. Do not miss any opportunity before getting enough cash for your dream loadout!

Good Starter to Jump Into Contracts

As these weapons are easily found in the field, you can jump right into contracts without having to farm around to get Loadout Drops. Start chasing Contracts immediately before the opposition gets the chance!

What Are Warzone Custom Loadouts?

Custom Loadouts are a sets of weapon & perks combination presets made by the player. It is accessed from the Weapons tab in Multiplayer or Warzone Interface, and has 10 slots for players to use.

Your Warzone loadout will mirror COD MW Multiplayer loadouts and vice versa. While its convenient that you can carry them over, you will now also have to balance your 10 Custom Loadout slots for Multiplayer and Warzone.

You will be able to unlock Custom Loadouts once you reach Rank 4 or "Private 4" in Enlisted Rank. If you are not yet at that level, you will only be able to use pre-made classes in Multiplayer.

In Battle Royale mode, you must buy & call in Loadout Drops available at Buy Stations first to access your custom loadouts. Plunder mode has no such restriction and can be selected as usual.

Some Perks Have Different Abilities In Warzone

Some perks has their effects altered in Warzone, giving different bonuses fit for the Warzone mechanics instead. These are:

Perks That Differs From COD MW

Warzone Best Loadout - How To Get Them In Warzone

In Battle Royale Mode, you'll need to acquire loadout drops and interact with it to gain loadouts. It can be bought at Buy Stations or will drop once enough gas circle closes.

Deploy With Loadout In Plunder

In plunder, there is no restrictions on how to get weapons as you start with your desired loadout. Loadout Changes can be made while you respawn.

Check out Plunder Mode Guide here!▲Back To Table Of Contents

Below is a list of criteria that was used to recommend custom loadouts for Warzone.

The recommended loadouts need to be versatile and flexible enough to handle the ever-changing dynamics of the Warzone maps, such as increased fighting range, enemy location uncertainty and overall chaos. We try to consider these in our builds.

Warzone punishes death rather harshly in its Battle Royale and Plunder modes, so we try to add things that can sustain or defend the player so they can stay alive longer. Staying alive gives you more opportunity to win in the fast paced battles of Warzone.

The recommended loadouts mostly centers around weapon characteristics & strengths that best suits the situation in consideration. They will attempt to enhance or cover the weapon's weakness/ restrictions.

With the new Body Armor mechanics, getting consistent hits are just as important as dealing out damage fast. Loadouts should also have a high DPS to get ahead in the fight.

I take smoke grenade with the stealth build, since it can let you disappear like a ninja or shoot through it with thermal optics.