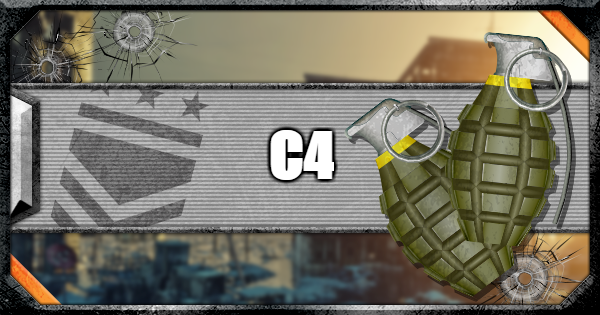 Read this guide to learn about the C4 Lethal equipment in Call of Duty: Modern Warfare & Warzone! Find out how and when to use, gameplay tips, tricks, & more!!!

The C4 is a thrown explosive that sticks to most if not all surfaces. It then explodes when the user activates it through a detonator.

C4 will stick to the surface it first touches when thrown. Make sure there's no obstacles between the surface you want to attach it on.

Can Be Attached To Vehicles

The C4 also has the ability to stick to some vehicles. This allows the user to assume a high-risk anti-vehicle role via C4 assaults.

Unlike most lethal items, the C4 must be manually activated to be detonated. If the user dies before detonating it, the C4 disappears.

Throw It On The Ceiling Of Rooms

When used to defend rooms, C4 on walls and floors can be easier to spot, so place them on ceiling if its not too high. It'll create an airburst effect as a bonus.

Defend Key Points While You're Away

Key locations such as headquarters have a capture area that players must stand in to capture. Use C4 to booby trap these locations, and go attack or defend other locations. If you see your trap zone being captured, detonate the C4.

Throw Into Windows To Clear Rooms

Just as you would throw grenades into rooms, a C4 would do the job as well. Just be sure to move back a bit before detonating so as not to accidentally blow yourself up.

Lethals are equipment which you throw or place on the ground such as grenades or mines to damage or even kill enemies. Using lethals at the right timing is the key to your success.

Leveling up your ranks in CoD: MW will unlock various lethals that you can use in various multiplayer game modes! These include Perks, other equipments, weapons, and more!

to the guy above, press the same key you used to throw it (g or middle mouse by default) OR double tap the "use" key default F